Latest addition to add to the 1st Regiment already completed, these have a Brigade Commander plus ADC as well. I believe in 1813 the 1st regiment was attached to the Chasseurs a Cheval and the 2nd regiment attached to the Dragoons. (of the Guard)

Art M supplies each body without a head, leaving you to insert the head, facing in different directions. 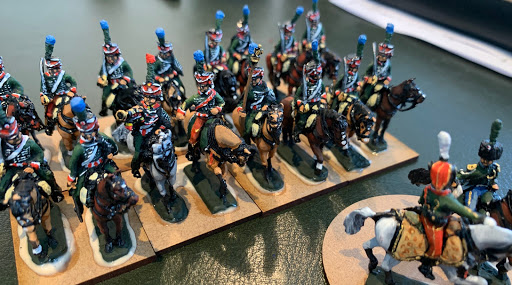 Ironically this game was postponed from June but will go ahead on the 5th and 6th September, the 6th September being the anniversary.

Who was to blame...Ney or Napoleon for the French defeat? My take, for what it is worth, is that they are both culpable. Napoleon promised Ney support in the form of the Guard and knowing he was was delayed, Napoleon should have sent runners ahead telling Ney to stop and wait. Ney equally should have made sure Napoleon was in support, and should have had his Corps in a triangle or diamond shape instead of being strung out along a single road, with each Corps 2 hours marching distance apart. Once Ney was checked at Dennewitz (the same day that Napoleon set off in support) his troops were not in a position to react to the situation he faced. Had they been in a diamond formation and closer, the Prussian surprise could have been turned into an historic victory. As it was this battle could have gone either way and I hope to replicate that balance. L shaped tables are in position and total 18 feet from north to south and 17 feet across from east to west.

The map below shows the topography with the road to Berlin running through Dennewitz from south to north (bottom to top) Further maps, including starting positions, will be uploaded after the battle together with an OOB. Commanders are not this time being given advance warning of when and where their units will arrive.

Over 3,000 1/72 figures will soon all be tabbed up. Most are Art Miniaturen, with some Newline Prussian infantry.

Nations on display will be Prussian, Russian, French, Italian, Saxon, Bavarian, Wurttemberg, and Wurzburg. No Swedes...sorry!

Really looking forward to welcoming the small but dedicated crew to the barn for an interesting game.

Using the Art Miniaturen Saxon Hussars, these are pretty much identical. The horse furniture being the same which makes them a closer fit than trying to convert French hussars.

The blue was a challenge....so ended up with standard blue (vallejo 70.925) plus Magic blue (V 72.021) and Pastel blue (V 70.901) with a little back for the base colour. Seems to look ok. So many sources have such a variation. Pure white so the figures stand out. I still use one Humbrol colour religiously....the flesh. Burnt umber and parasite brown make an excellent undercoat on the face (I don't bother doing this for the hands) and then Humbrol matt 61 flesh for the highlights on the face.

Doesn't look as though the Art M Prinz Clemens regiment (Saxon) will be ready on time (for Dennewitz on the 5th and 6th September) so will have to wait for Jorg to produce them. 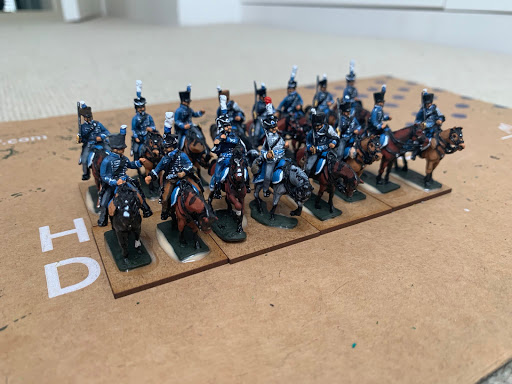 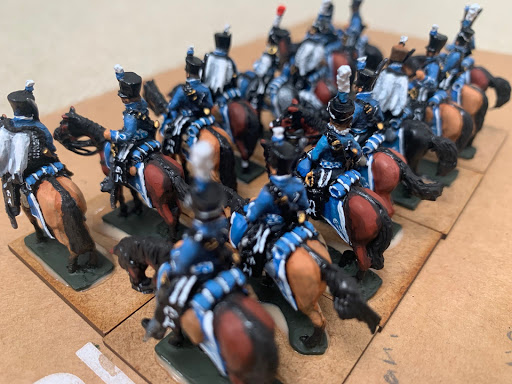 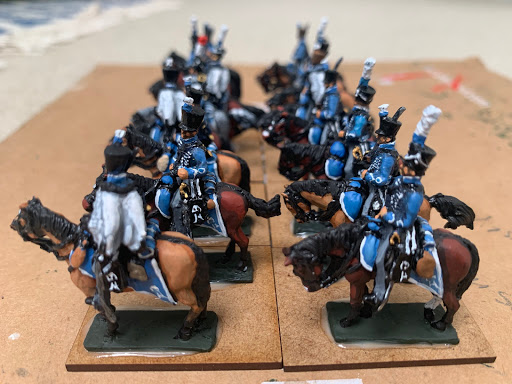 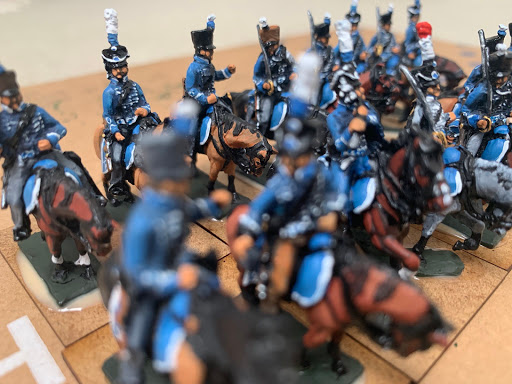 Next up with be another Garde d'Honneur regiment. Perhaps the 2nd or 3rd regiment.