Fresh off the drawing board are some Italian, Saxon and Polish artillery limbers. All figures are Art M and the horses used are their Prussian artillery horses. 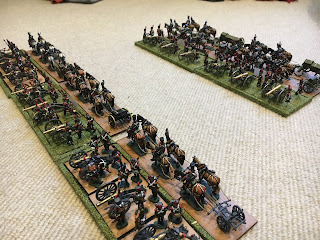 Next year we hope to play Leipzig. (May/June 2018) There are numerous difficulties in playing this battle, including the scaling down of the numbers involved, the terrain and table layout. I don't think one can fight Leipzig without including the northern (Mockern), western, (Lindenhau) and southern sectors. If we miss out one off these three areas, players will not fully appreciate the awful situation Napoleon had got himself into. So having considered dropping Mockern, for example, I think this would be a mistake. Whoever commands the French in this sector will need to be made of stern stuff.

So I envisage a "horseshoe" shaped battle depicting a table layout where most of the action will be in the southern sector. I think we can omit the Saxons (shame) and Swedes (I don't have any anyway)  However, we do have French, Poles and I hope Italians also to pit against the Austrians, Prussians and Russians.

Likely to be a 2 day game, allowing the French some night movement (perhaps to reinforce Lindenau as that location will have significant victory points) and we will need a minimum of 4 commanders per side, preferably 5 or even 6. More to come on this nearer the time.
We will use the OSG Leipzig map shown below. 1 hex = 32 cm/1 foot. 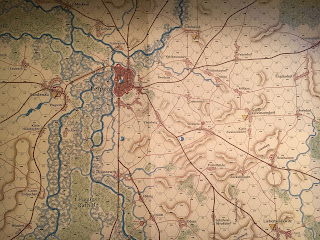