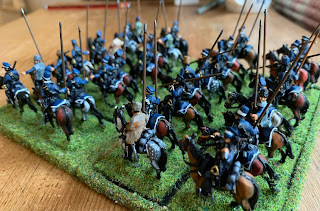 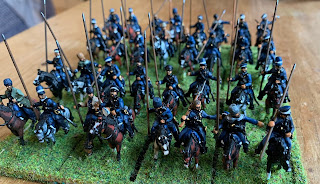 The first batch of Art Miniaturen Cossacks are now complete. These 2 regts have been painted as Bug Cossacks. The remaining 4 regts will all be painted as Don Cossacks. Dresden 1813 (6,000 figs approx) will be fought at the barn in June 2022. The OOB is well on its way. Borodino (5,000 figs approx) (1,000 Russian Art Miniaturen infantry are on their way from Germany to supplement the Newline figs already on parade so lots to paint) will be played out in June 2023.
Posted by Napoleonics 20/20 at 07:37 No comments:

The foot gunners' uniform is very similar to the French, while there is conflicting evidence of whether the HA gunners had hussar breeches or trousers in 1813. I've used the Art M foot and horse figures in each instance. The train riders in a more grey than grey/blue. Plus a plume for the HA riders which distinguishes them from the foot but is not necessarily correct. Chances are by 1813 they would all be in covered shako, but where is the fun in that? 3 model guns for the foot and two for the horse...again mainly to help players distinguish between the two in the heat of a battle and make it marginally easier for the HA to manoeuvre. Guns and limbers in grey. (blue for the Westphailian Guard) 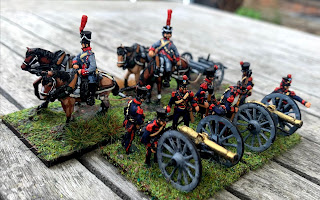 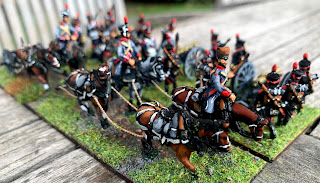 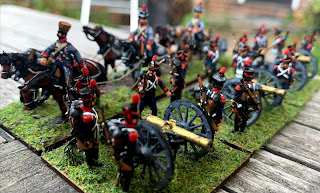 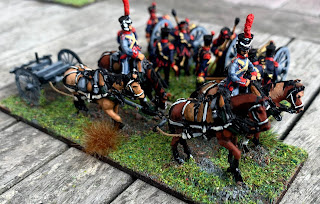 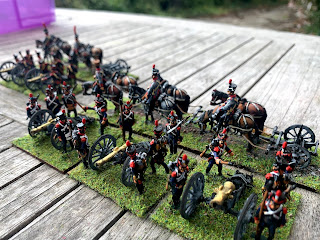 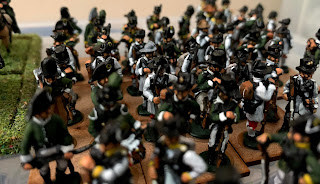 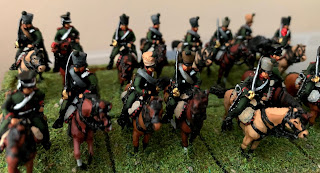 All Art Miniaturen, except a couple of Hagen dismounted figures to add interest to the Westphalian hussars. (despite the fact that they didn't do much but look colourful). The two Austrian landwehr battalions are from Salzburg and Styria.(yellow/green and white/green respectively)
Posted by Napoleonics 20/20 at 12:13 No comments:

A great team building event was played out at the weekend. Thank you to all who came and made it happen.

The massive snow sheets were kindly donated. But it meant that each building needed a covering of snow, as well as the hedges, trees and walls. The covering for each roof was cut out from a roll bought on ebay. The woods and the rest were spray painted. The hills under the mat were also kindly donated even if they were a little difficult to distinguish.


Time was not on the Allies' side so Sacken wasted no time in advancing his Russian infantry immediately towards La Rothiere. Unbeknown to his 21st Century counter part, many of these troops had suffered badly at Brienne days earlier so were not as good in terms of quality as the Russian commander might have hoped for. Indeed Von Lieven had been allocated a -1 for his personal rating. This would not help the assault on La Rothiere. The moment these Russian masses got to within effective artillery range, Drouot's massed battery opened fire. (represented by two foot batteries and one horse battery). To reflect the snow and poor visibility any commander wishing to fire artillery or musketry (not skirmishers) had to throw a 1D8 first. A score of 1 would mean no firing that turn. Frustrating when it did occur.

The Austrians in the south and Wurttembergers in the corner all failed to appear on move two as expected, but did appear by move 3. Wrede's Bavarians and Austrians appeared as planned. (I think)

The French decided to withdraw part of the Guard cavalry (C3) Chabanais Old Guard brigade re-deployed towards Gerard, providing Gerard with some artillery as he had none.

They also decided to commit Rottembourg's YG brigade (Inf 1) into the defence of Petit Mesnil from move 2.  Decouz's YG voltigeurs (Inf 3) were deployed to the flank to help Marmont on move 6. Shortly after Levesque-Laferriere cavalry (C1) was deployed to cover the gap between la Rothiere and Gerard's troops holed up in Dienville. Only Meunier's 1st voltigeurs (Inf 2) and the Honneur Guard (C2) remained in reserve into Day 2. Arguably both should have been thrown in earlier.


In an attempt to force Sacken's columns into square, the 10th Hussars (C6, separately brigaded) moved to support Drouot at la Rothiere on the right while some Eclaireur Scout cavalry moved up on the left. Some of Von Lieven's and Scherbatov's battalions were forced into square and were devastated by Drouot's artillery. Despite the supporting brigade of Olsuviev, the Russian advance began to grind to a halt. Successive assaults on the strong point in La R were beaten back. But Victor was going to need some French reserves soon to help his beleaguered force.
Guyot's horse artillery (C4) was cleverly deployed behind the hedges and gardens in Petit Mesnil and was able for a while for fire at the advancing Russian cavalry between Petit Mesnil and La Rothiere in the flank. The initial Russian attack of Lanksoi's hussars (C2) were beaten off fairly easily. However, Russian infantry made this ideal location increasingly less suitable and soon this HA battery was withdrawn from the village.
Chabanais's Guard (C3) cavalry unwittingly got chewed up by Russian artillery and had little option to try and attack and catch Austrian infantry (Inf 2) before they had time to form square. They got there just, the Austrians threw a 1 on the 1D8 and all the French had to do was avoid throwing a 1 to win the melee and possibly rout a further battalion. Yes you guessed it, the French threw a 1.... which stopped it and then was destroyed by a combination of artillery and musketry. A whole brigade of cavalry and their HA wiped out in a matter of minutes.
Contrast this with the careful handling of Doumerc's cavalry (C7), Heritier (C8) and Briche (C9) all of whom lasted well into day 2 and did much to hold the French left flank while the southern front began to crumble. Lucky throws from Marmont and his defence of Morvilliers helped to stop the Austrian advance, so it was largely left to the Bavarians to veer right and attack Morvilliers while there was still time.
In the southern corner, the Wurttembergers eventually swept aside the stubborn Joubert from La Giberie and the woods.  Able to fan out there was little to stop the Wurttemberg advance once Pire's (C10) cavalry had also been despatched. Ironically it would turn out to be these infantry and supporting cavalry (Von Albensleben C6 and Von Jett C7) that would succeed in "outflanking" the French at the hinge in the door, losing only two battalions in the process.
In the northern sector, the Austrians just did not have enough infantry or cavalry to attack and take Morvilliers on their own. They were always going to need Bavarian help, which only came belatedly towards the end. Lucky high throws of the dice by the French commander saw off the Austrian threat, which lulled some French into thinking this was going to be the blueprint for the rest of the battle.

By the end of day 1, the French still held La Rothiere, had only lost one building (1/3rd) of Petit Mesnil and still comfortably held Morvilliers. There seemed little threat of the outflanking move, which was also a requirement for an Allied victory.

But all the Allied troops including their Prussian and Russian guard elements had deployed so the storm was yet to come. Russian Dragoons (C3) and Karpov's Cossacks (C4) speared headed the attack into the French void and linked up with the advancing Prince of Wurttemberg. This closed the trap on Joubert whole remaining battalion was forced to surrender.

Decouz's (C3) foot artillery unlimbered to the west of the stream and covered the right flank of Morvilliers. The infantry moved west in at attempt to hold up the Bavarians but were cut down in the process. In hind sight perhaps they could have left one battalion with the guns (which was later over run by Cossacks) and move the remaining two battalions to Morvilliers itself?

Frimont's hard pressed Austrians had kept Marmont occupied around Morvilliers for a long time but were by now a spent force. He was now reliant on the Bavarians to attempt the assault on Morvilliers as time was beginning to run out. 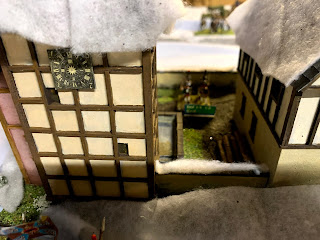 
Littleffort was made by French forces to take back Petit Mesnil as the Prussian Guard infantry were closing in fast, which made such an attempt impossible. However, Meunier's YG did try to throw back the Pavlov Grenadiers who had just taken the strongpoint and 2nd building comprising La Rothiere. Neither attempt was successful and their crucial supporting infantry were blown away by Russian artillery before another assault could be made.
Austrian infantry were pouring in from Dienville, though Gerard did a fine job with no artillery support.
The finale focused on Morvilliers. The French high command had already conceded defeat on move 16 in Dienville, La Rothiere and Petit Mesnil. The Wurttembergers had managed to get both cavalry and infantry off the flank table, to satisfy the victory condition of an "outflanking move" so all was left was if the Allies could take Morvilliers? The French needed to pass their "brigade test" in order for the defending battalion to remain in the stronpoint. Two moves remained. Marmont threw an 8. Defence secure. The Bavarians could reach on the final move of the day but would not be successful if the french battalion was still in situ. Final throw for the French commander's brigade test on the 1D8...a 2! Disaster...the French were forced to withdraw.......the Bavarian infantry simply walked in unopposed.
Game over. A comprehensive Allied victory. While losses of infantry and cavalry were roughly even, the French lost most of their artillery while the Allies lost none. A very bloody affair.
Note on the figures used. Almost all the cavalry, artillery, command and skirmishers are Art Miniaturen. Some Hagen (Pavlov Grenadiers), most of the Russian infantry and Prussian Guard were Newline Designs. A Russian jaeger battalion...Airfix conversion, and some Franznap. (Wurttemberg artillery, Austrian Uhland and Hussars etc)
Massive thank you for those that attended. Apologies to those that commanded less troops than you deserved (Frimont) and others who ended up being swamped with too many (Russians in the centre) Played in the best spirit and a massive thank you to those manufacturers mentioned above whose figures bring fun to us all.