Two good reasons why 20mm is the best scale for Napoleonics.

The debate as to what scale is the most interesting/suitable/relevant/works best etc for Napoleonics will go on for ever. Personally I think there are two good reasons why 20mm works best…

One is for the simple look of the figures on the table. One can marvel at the detail without the need to squint or bend down as though trying to make oneself better understood to a 4 year old child. Even with the 18mm AB figures I struggle to see what is what. Large formations of 28mm figures would require a table of gigantic proportions and frankly I think the overall look of 28mm can appear a little ridiculous. A little like those budget war movies made in the early 1980s where a battalion of infantry was represented by about two dozen extras. Just doesn't work. 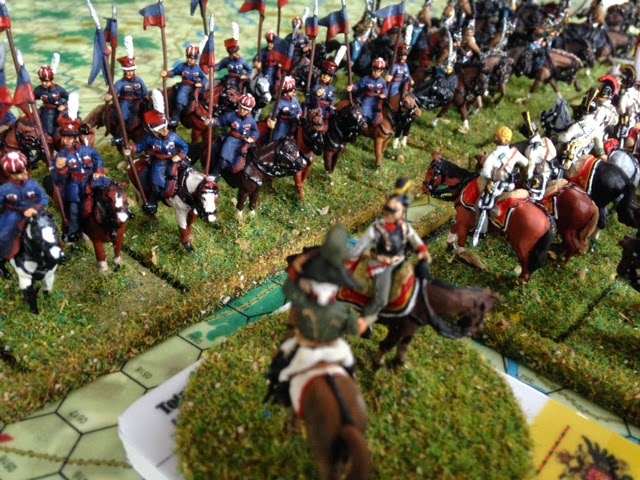 The second reason is just as important. This scale allows the correct artillery firing ranges to be used on a 12' x 6' table. The ranges for 25mm and most certainly for 28mm are distorted to allow a playable game on a 6' wide table. For 20mm this need not be the case… 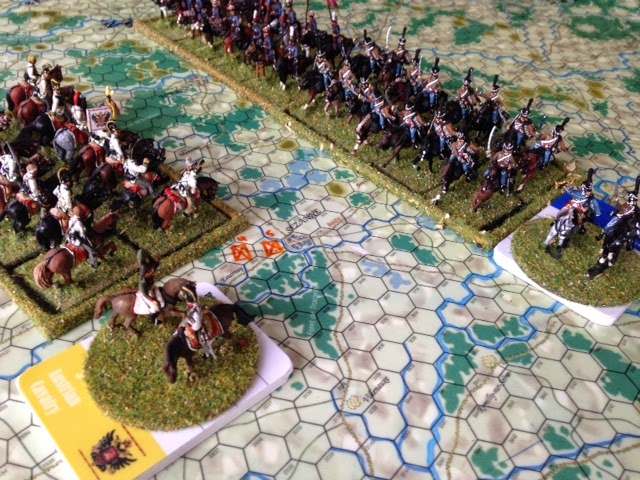 It remains to be seen if the French 2nd Hussars and Polish Krakus Cossacks (from Art Miniaturen) will be a match for the Austrian Cuirassiers. (also Art Miniaturen) Campaign map also shown.
Posted by Unknown at 08:09 1 comment:

The 1814 Campaign map (as below) is being distributed to all players in the near future. It ended up being cheaper to buy the original than print copies. (added to the fact that one worries about copyright etc) Such a large campaign map offers an excellent playing area for a Napoleonic game. Focusing on the area north-east, east and south-east of Paris it also could double up for other eras, notably the Franco-Prussian War or WWI and WW2.

6 players from Ealing and Heston (French) will be up against 6 from the Reading war-games group (Austrian, Prussian and Russian). The smaller skirmishes being decided by the umpires (two) and the larger games being fought out in the barn on the farm, which after the wedding is now empty.

It will remain to be seen if the Allies can secure the objectives within the 15 map moves (6am-8pm) where 1 map move = 1 hour. The Allies have more troops but will be prevented from communicating with each other. The French meanwhile will be working on interior lines and will be free to communicate.

Can the French blow key bridges in time, to keep certain Allied elements at bay while concentrating sufficient troops and crush other more isolated units just as Napoleon did in his lightening 1814 campaign as at the Battle of Champaubert
Or will the Allied march proceed unhindered on Paris?

The figures will largely be Newline Designs 20mm infantry, while the command, artillery and cavalry are now all 95% Art Miniaturen 20mm from Germany. There are a few Franznap thrown in. The buildings will predominantly be from the same German company that put on the wonderful Crobern 1813 display. It doesn't appear that these buildings can be bought anymore which is a shame.

The map phase of the game we hope will begin in the next 2-3 weeks. 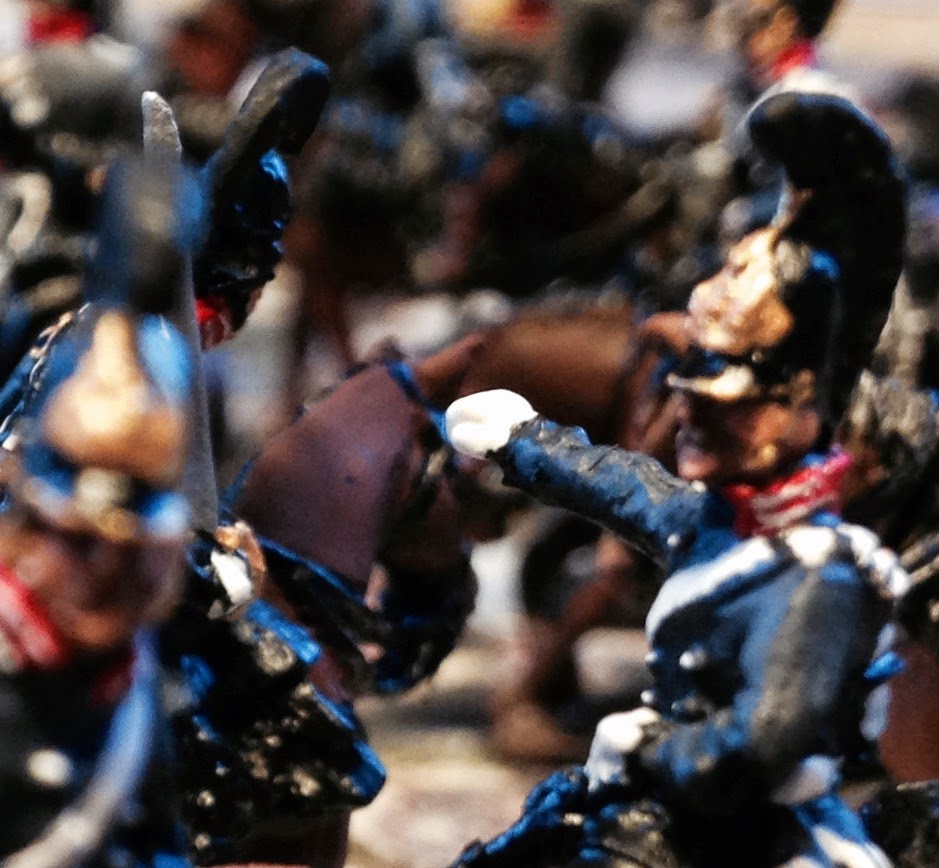 We will soon be hosting a "new" Napoleonic game (very) loosely based on the 1814 campaign. We will be using the Napoleon at Bay 1814 map (Avalon). Each player has had to get their own map which has been the tricky bit. Once laminated it offers a great playing surface for multiple eras…Medieval, 18th C, 19th C, WW1 and WW2.

Whilst the scaling is a little arbitrary, each hex on the campaign map will equal 18" on the table when large clashes are involved. Minor skirmishes will be resolved by the umpire by email. Each hex can be occupied by one brigade of infantry or cavalry, with or without artillery. Each brigade of infantry will number anything between 4-8 battalions and 2-3 regts of cavalry. Each battalion being 24 figures for all nations except the Austrians (32) and 16 for all cavalry regts.

Elements within the game involve:


A dummy game will commence in the next week to iron out any obvious rule defects with the game proper beginning in April. The large scale games involving the metal figures will commence in May.