Please refer to the Hanau map in a previous post.

The Allies were uncertain if any French would appear to the right of the Kinzig stream (now river) and at what point it might be fordable. They were convinced that given the space on the table, something would arrive…surely?

The French meanwhile would have their own problems of hacking their way through the forest, clearing it of Bavarian skirmishers and deploying their artillery. Admittedly this took 3 of the 10 moves completed so perhaps we could have started the game without this skirmish encounter. Also unknown was the whereabouts of the Russian Cossacks but the French rightly sniffed the saddle sores in the woods to the French right wing, where their own cavalry would come cascading down, and delegated French hussars to screen this threat.

Sadly the Bavarian artillery/limbers and caissons were not ready in time for this battle so I had to provide more Austrian ones. The French limbers and caissons are also work in progress. We fielded 6 brigades on each side and fairly large quantities of cavalry (probably should have been less), the Allies out numbering the French cavalry by one brigade. The Austrian problem was that one brigade of infantry was on the wrong side of the Kinzig with two brigades of cavalry, convinced that something nasty would appear to their front. There were two Austrian Grenadier brigades in Hanau itself with artillery and they were not permitted to move until move 3. 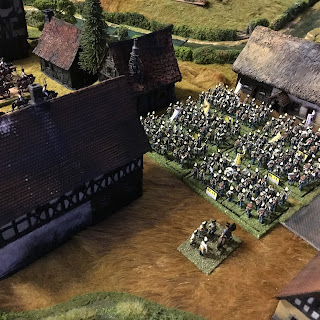 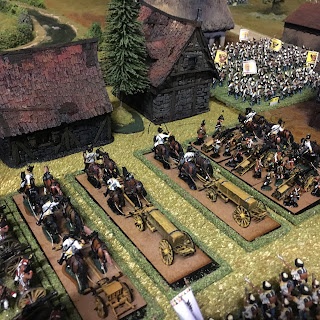 Once most of the Bavarian skirmishers had been cleared, the Old Guard emerged from the tree line to face two brigades of Bavarians with supporting foot artillery. Initially the Old Guard had difficulty in making their quality count but soon the left hand Bavarian brigade was under severe pressure.

Meanwhile the French left was left to a cavalry brigade of lancers and hussars, with one infantry brigade, and one foot battery to try and hold the Lamboy bridge. Efforts were made by both sides to take the village of Neuhof, with the Austrians being the eventual winners. The Austrian right wing by move 5 realised that nothing was going to appear to their front and so swung round and found the Kinzig fordable north of the Lamboy bridge.
The French cavalry on the French right swept down and were initially met by a Bavarian brigade of Cheveuxleger (Hagen) and Bavarian lancers (plastic / Zvezda) who decided to withdraw and allow the better quality Austrian dragoons to have a bash who had come up from a deeper position. The French cavalry did not have the width of deployment to make their numbers really count. The French Guard cavalry and heavy cavalry brought up the rear.

The French hussars on the French decided to enter the wood and became disordered as they did so, and sure enough spotted the cossacks hidden inside. Not one, not two, but three cossacks regiments with horse artillery ready to pounce. The Cossacks were then forced to attack and faired well, routing one French hussar regiment in the process. Where were those Krakus Cossacks when you need them?

The Bavarian centre was in danger of collapsing as the 1st Bavarian (left) brigade was routed and removed, but the 2nd brigade held on to form a defensive line. The rear Austrian Grenadiers moved out of Hanau to form a second deeper defensive line should all else fail. The Austrian Cuirassiers were thrown at the French Guard, using the initiative double move, and caught several Old Guard battalions not in square, who were swiftly put to the sword. But Austrian cavalry reserves were drying up while the French still had fresh Guard and heavy cavalry to commit.


In the end the Allies did better than expected and a second day of gaming might have produced a conclusive result. The Austrians did manage to cross the Kinzig and the French left looked particularly weak as their infantry and artillery covering the Lamboy bridge were destroyed. Their cavalry retreating in the face of overwhelming numbers. The Allied centre right held, the Austian grenadiers never having been committed, so it was likely that any further French advance was going to be tough. The French were never really able to deploy their artillery properly, as there was little space….even on a 17 foot wide table. Had the French left ignored the Austrians on the far side of the Kinzig and attacked the 2nd Bavarian brigade to their front, it might have been interesting to have seen what would happen. Perhaps the three wasted moves clearing the woods of the Bavarian light infantry might have given the french more time to concentrate their efforts on the Bavarian 1st and 2nd brigades. Perhaps a Divisional test for the Bavarian 2nd brigade. (which we didn't do) The sensible approach, for the French, was to defend their left and rely on the French Old Guard and cavalry, which is what they did.


Good fun by all. Some new and newish commanders got to grips with the rules remarkably quickly which made the job of umpire considerably easier. Thanks to all who came and the next game will be on the 2nd July.