Another 1813 Napoleonic game held in the barn..

As the rules get better so does the game. This time we had 6 brigades of French infantry (a Bavarian brigade, a poor Saxon brigade, a French conscript brigade, an excellent Old Guard brigade, a good Polish Brigade and lastly a standard French line brigade) and 5 brigades of cavalry (1 heavy, 2 medium and 2 light) Mostly Art Miniaturen cavalry except for a couple of plastic sets (4th French chasseurs with yellow facings and some Bavarian lancers in green and blue) Most of the infantry are Newline.

The Prussian Corps was made up of 6 brigades of infantry which included one Guard's brigade with landwehr intermingled into the other brigades. Plus 5 brigades of cavalry. The Guard du Corps cavalry were classified as excellent but the Cuirassiers (without armour) as good only…on a par with the French Dragoons. Added to this mix were Prussian Dragoons, Hussars (Silesian, Brandenberg and the 1st Lieb Hussaren classified as good, National Cavalry and Uhlans as well as lots of landwehr cavalry. All Art Miniaturen. Most of the Prussian infantry are Newline.

3 Objectives…the village (5 buildings), the farm (2 buildings) and a supply road connecting 2 bridges. The last objective perhaps being the hardest to achieve.

The Prussians had to rely on line infantry to take the village, their Guard to clash head on with the Old Guard in the centre and a mixture of units for the two bridges.

The French cavalry attack in the centre was made up of the 10th Hussars in blue, the 1st and 5th line lancers. The hussars headed straight for the Silesian foot battery (yellow facings and white cross belts) and had the French not thrown an 8 (1D8 throughout the game) the guns would have been lost and a breakthrough would have resulted in another Prussian unit being wiped out. The lancers also were stopped by some plucky Prussian infantry who refused to form square and should have been routed. Despite this set back, the attack fulfilled its aim of slowing the Prussian advance and allowing the Old Guard to take one half of the farm and literally were knocking on the door of the 2nd building. The sergeant with his axe was seen delivering the blows.

The Poles were successful in taking the village but Prussian units remained a threat to the end in that sector. The early cavalry clash between Prussian landwehr and the French 19th and 23rd Dragoons resulted in both sides with little or no meaningful cavalry.

The Saxons repeatedly failed their brigade test and urgently tried to form square to beat off a Prussian cavalry charge with dragoons and had to rely on their foot battery on the hill to do the job. Their two skirmisher stands from the two light battalions successfully inflicted damage on the Prussian Guard du Corps who veered sharp left to relieve the pressure on the Prussian centre. Prussian Silesian landwehr cavalry later in the day swept up the road and attacked the saxon flank. A poor Saxon brigade coupled with allocating a poor brigade commander to the Saxons meant they spent most of the battle totally paralysed. The Bavarians faired slightly better.

A spirited French cuirassier attack on the furthest bridge did cause some debate with the rules. The French could have assaulted the 2nd building in the farm when they had the chance instead of firing at it. Thereafter a failed brigade test halted any more attempts by the Old Guard, at taking the building.

Overall a marginal French victory largely because of their success in taking all 5 buildings in the village. 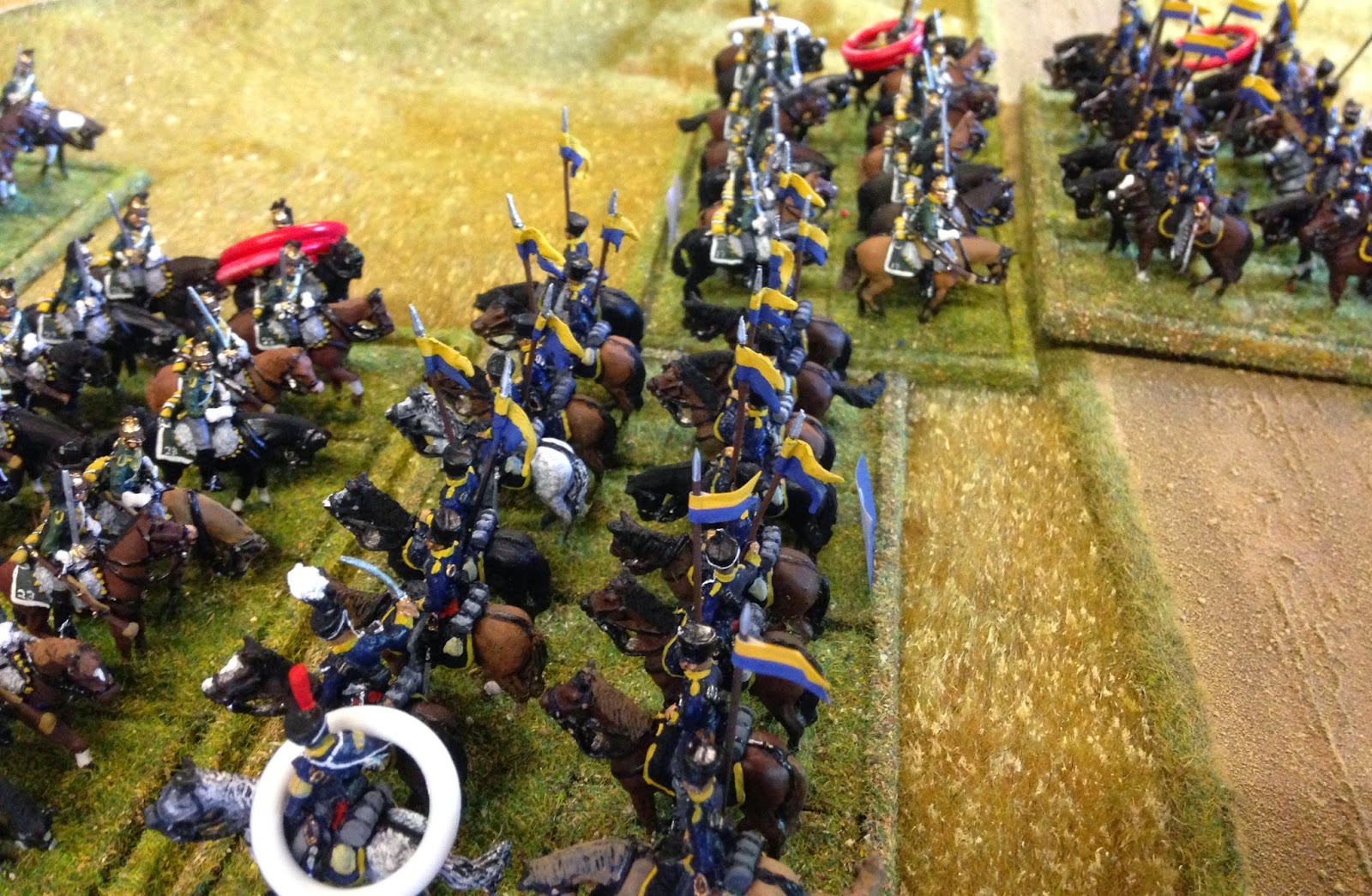 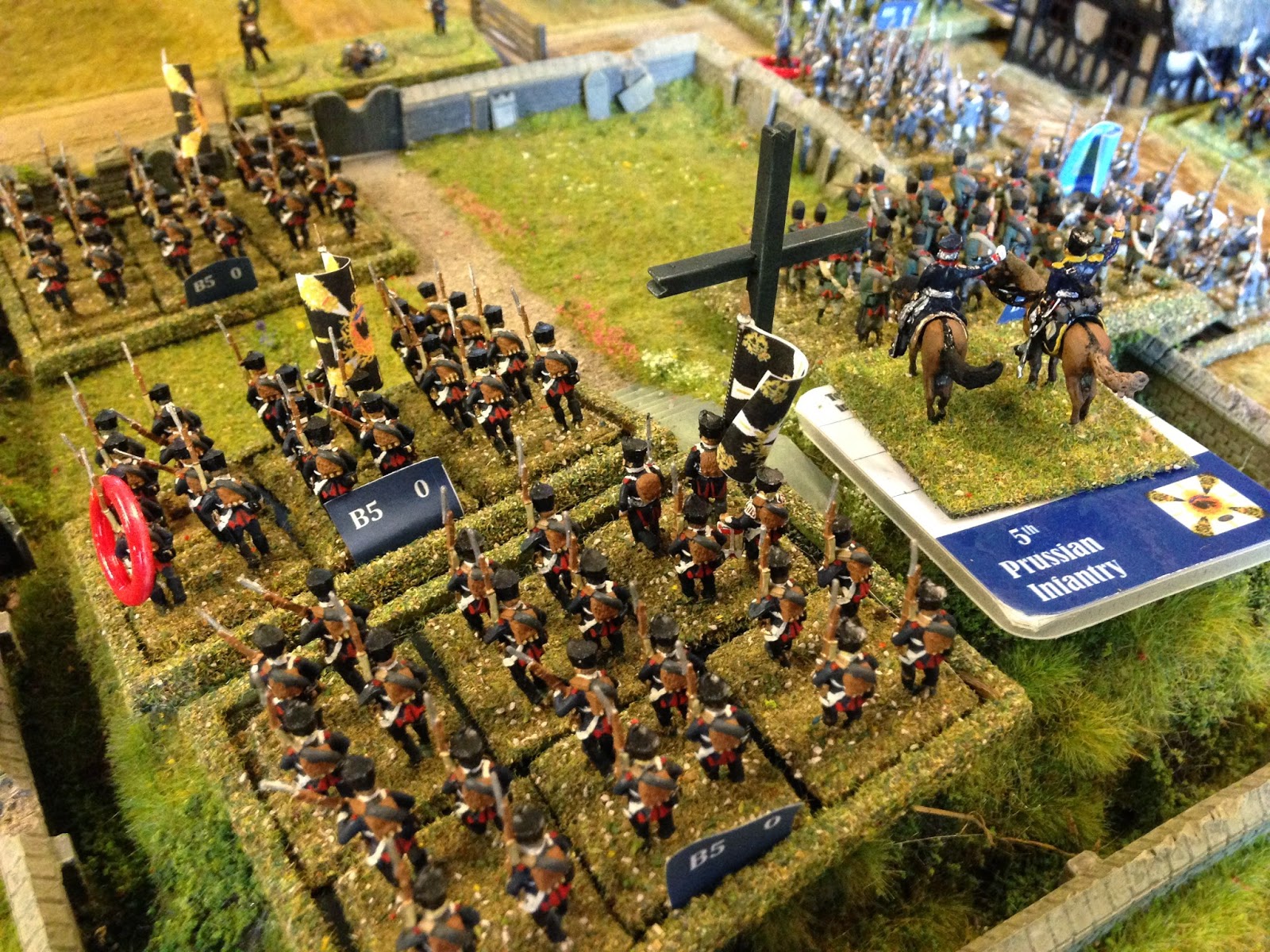 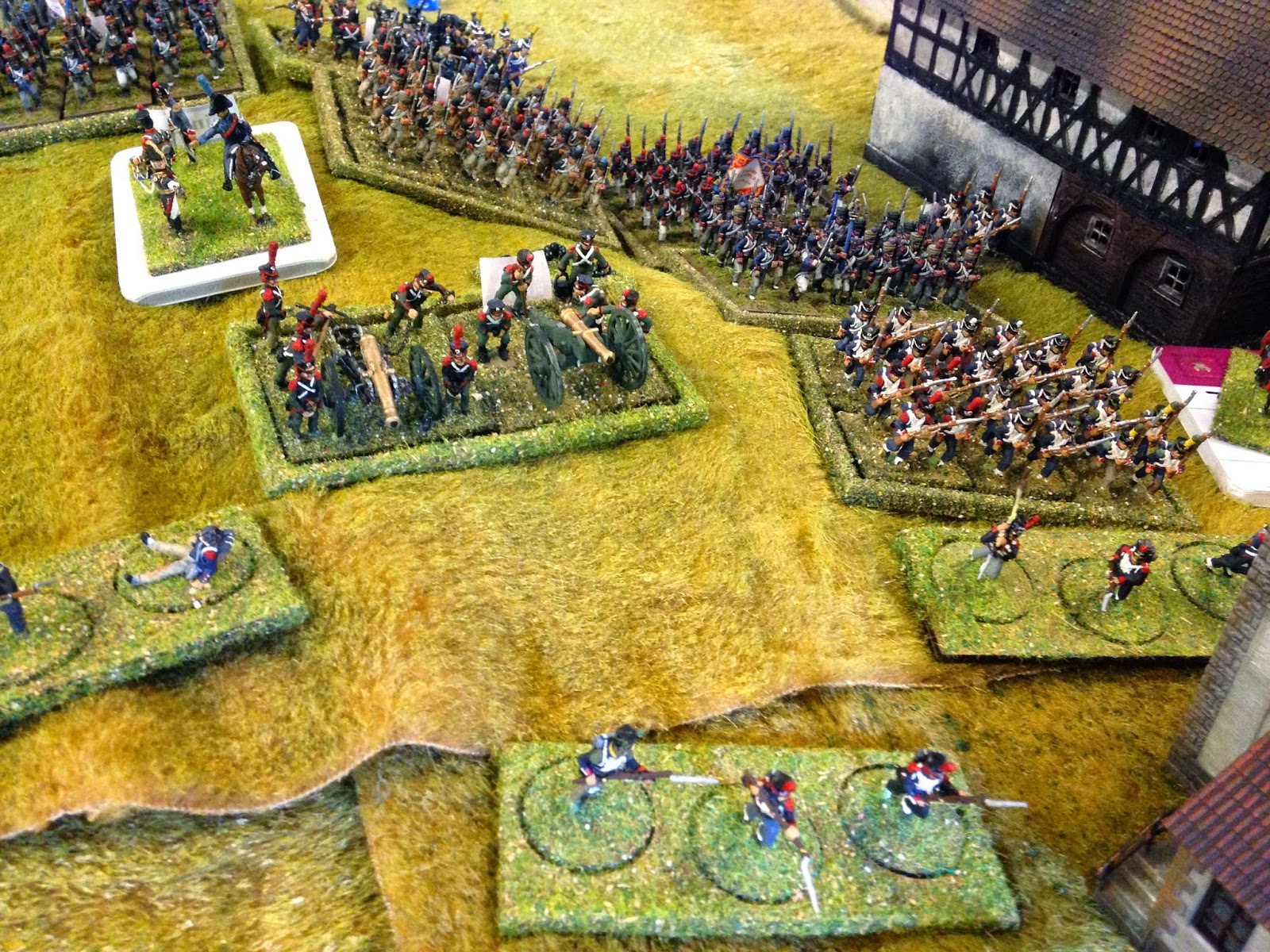 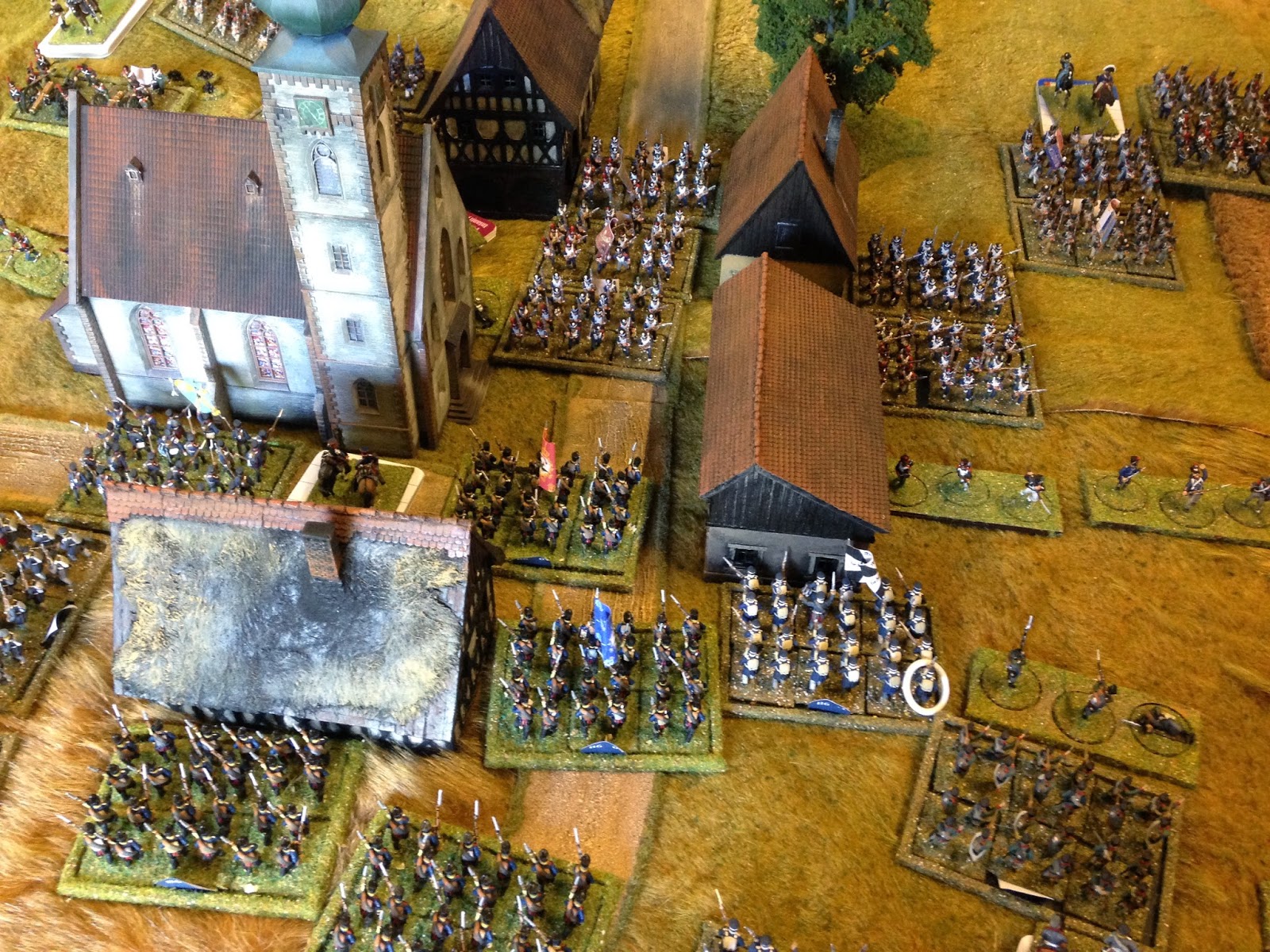 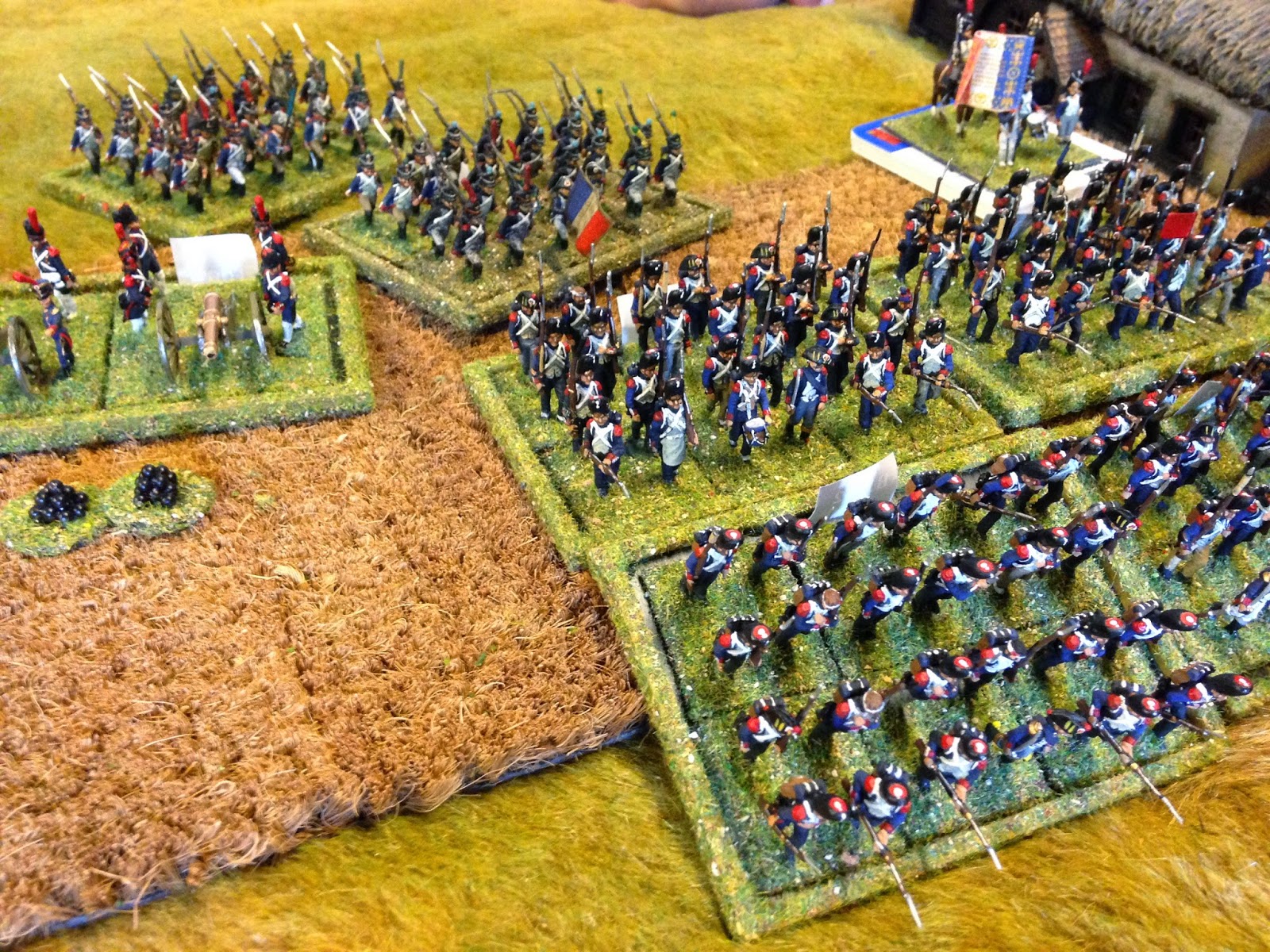 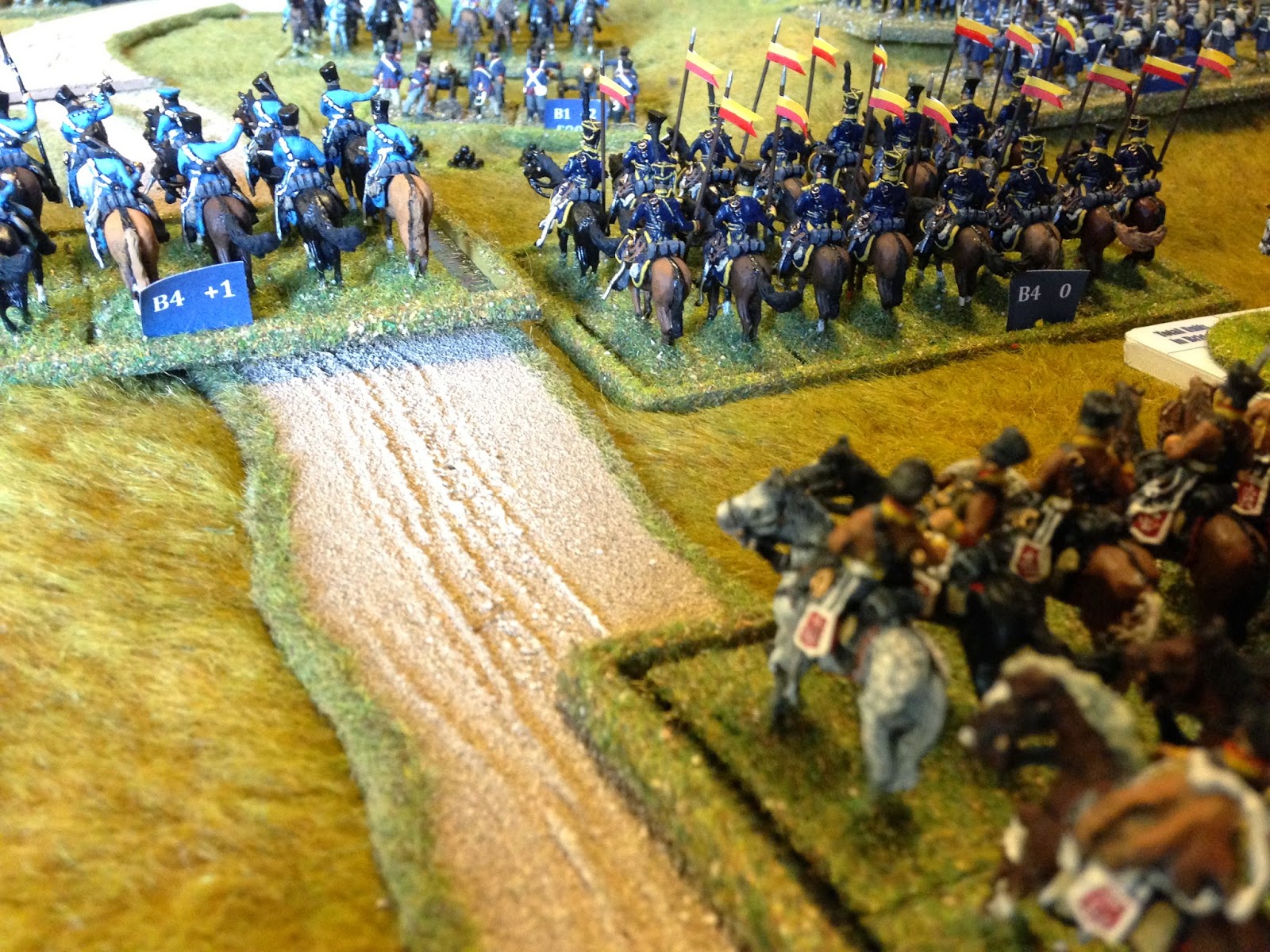 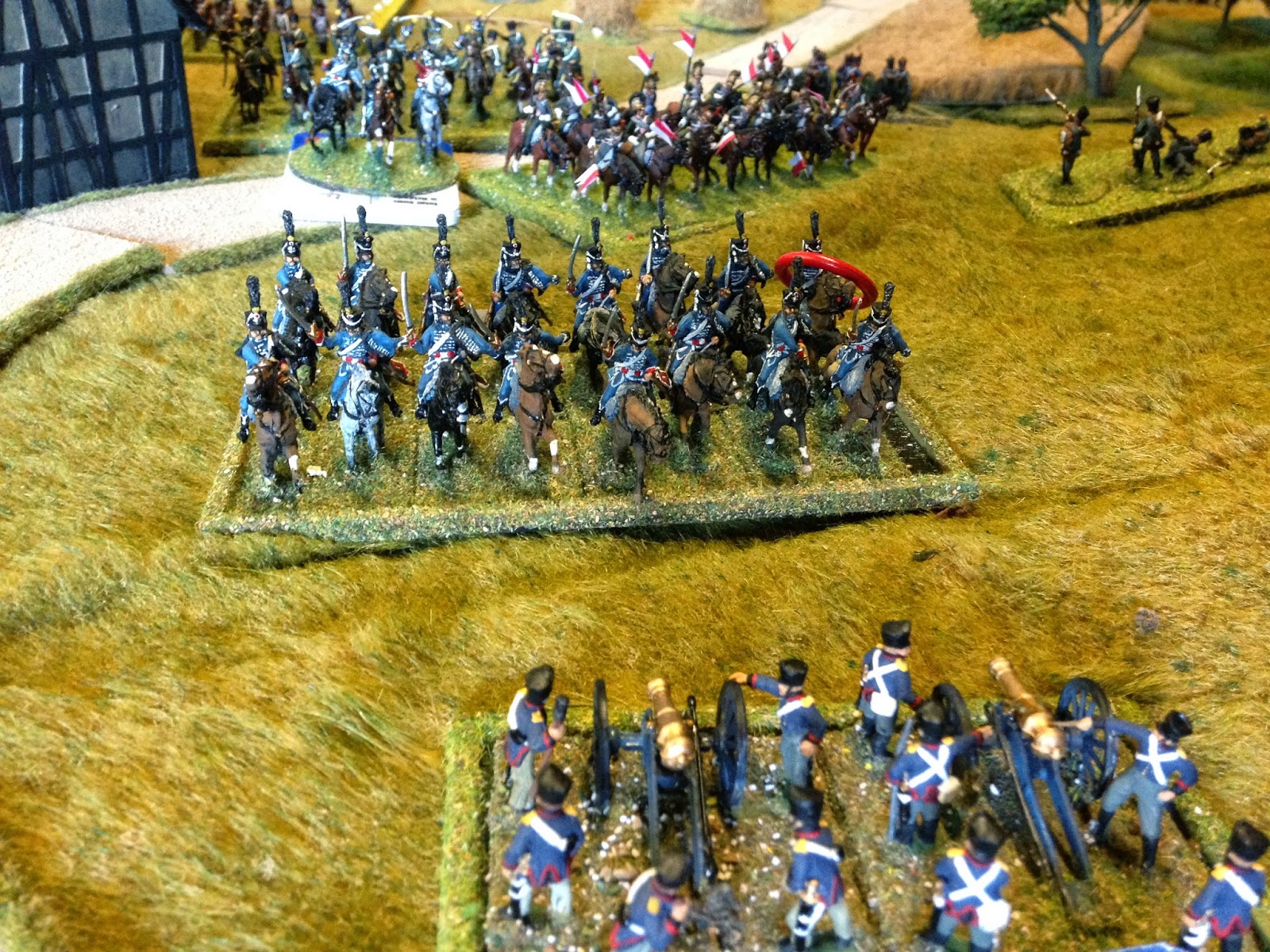 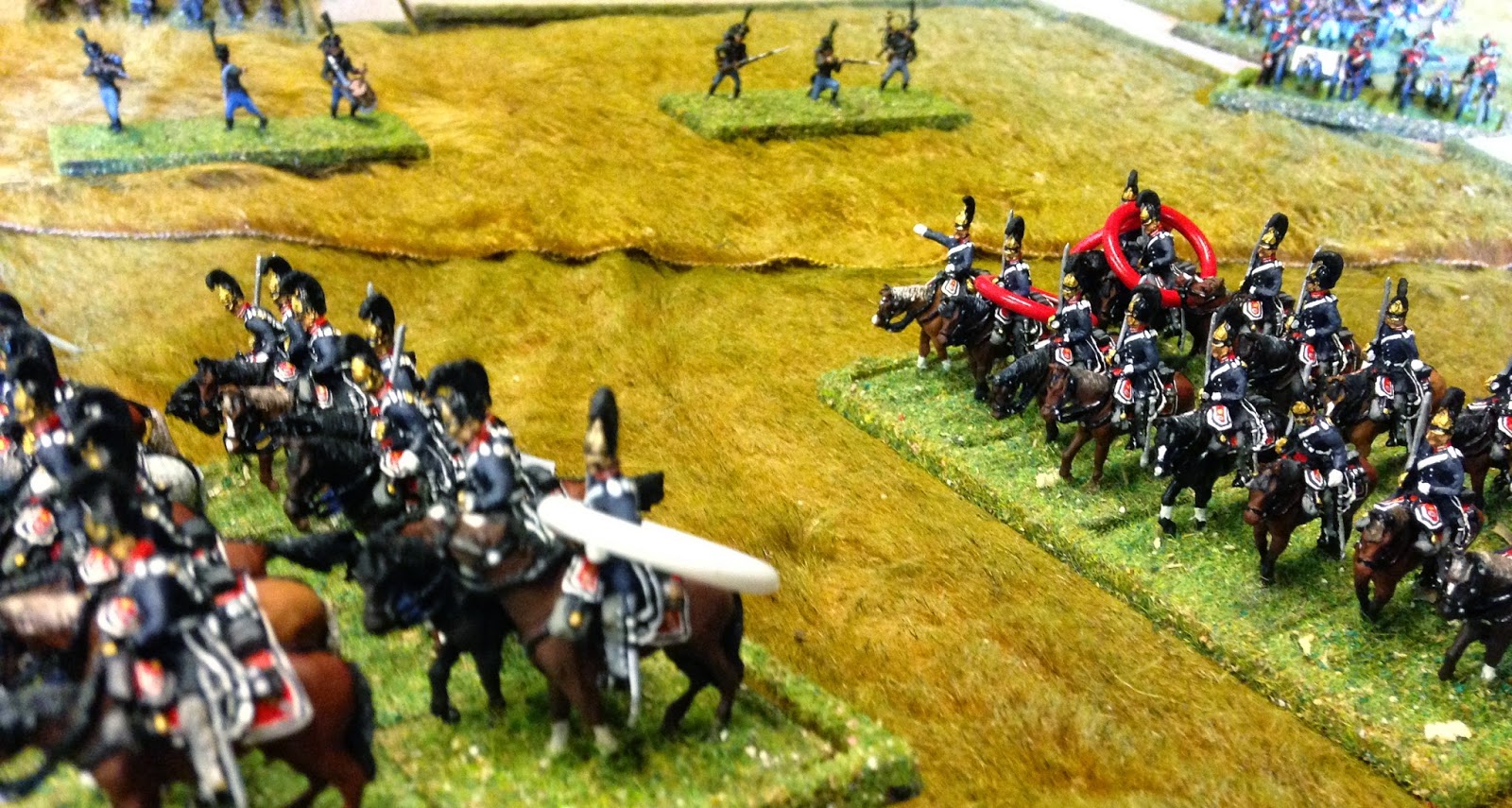 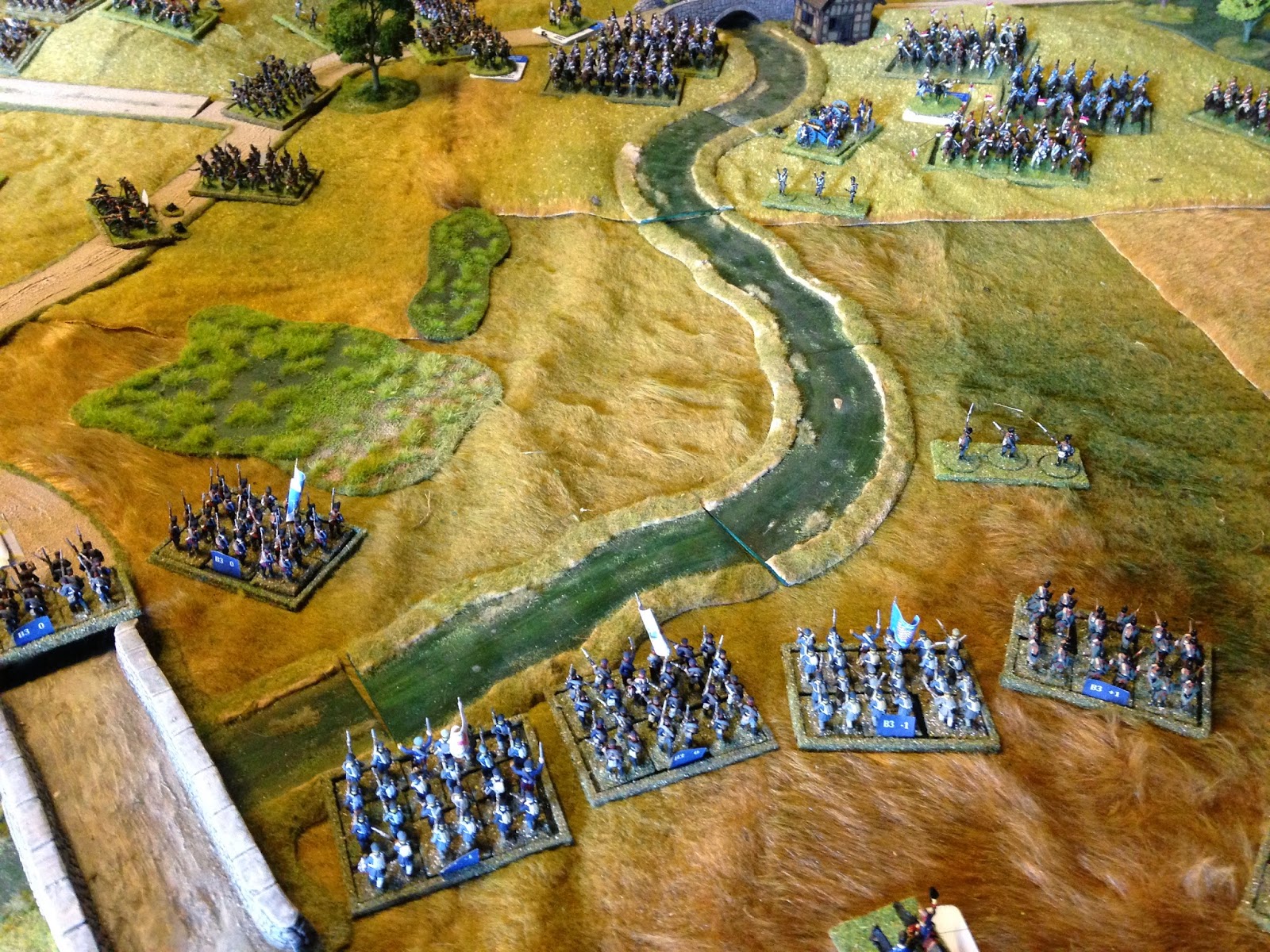 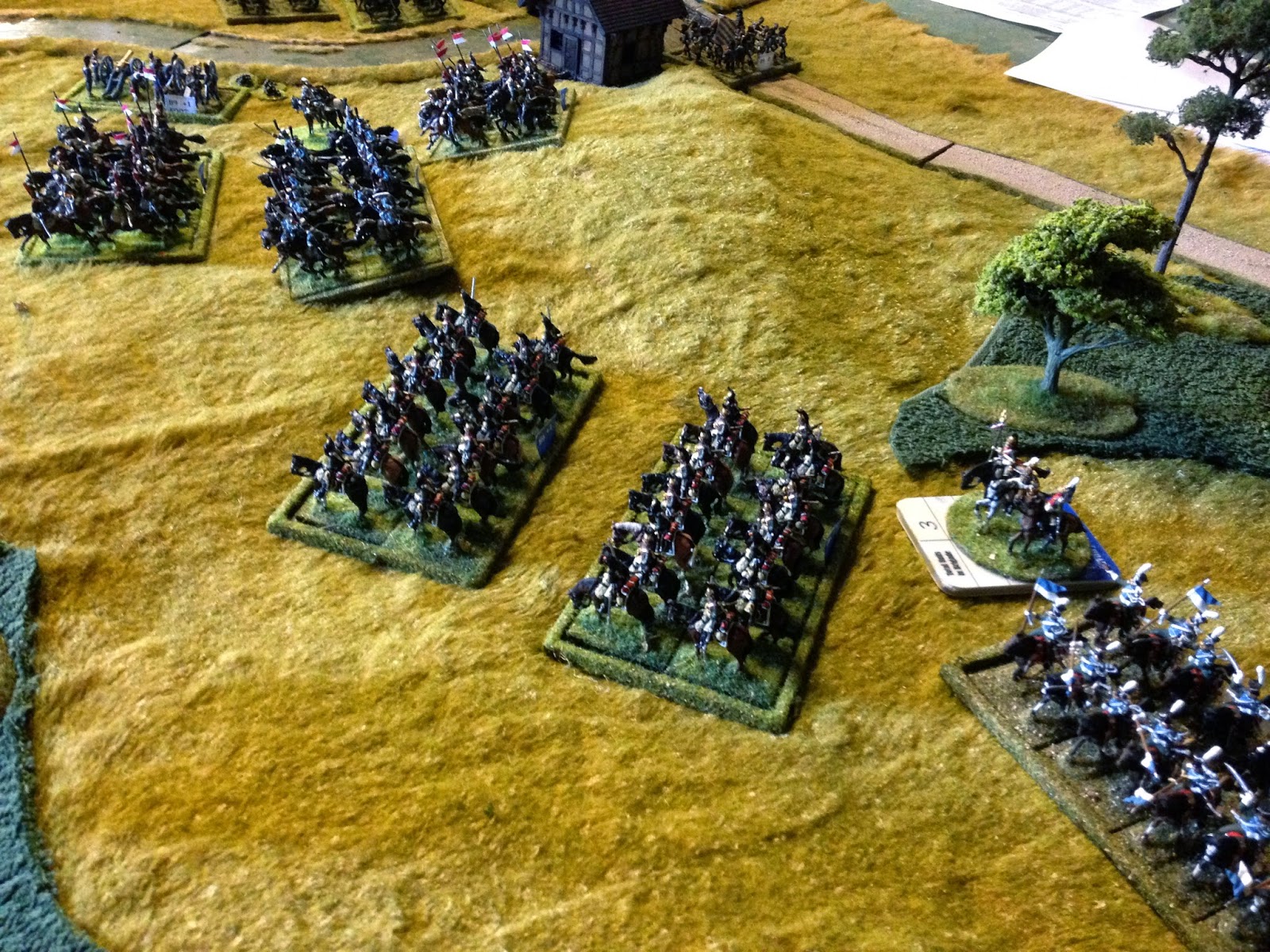 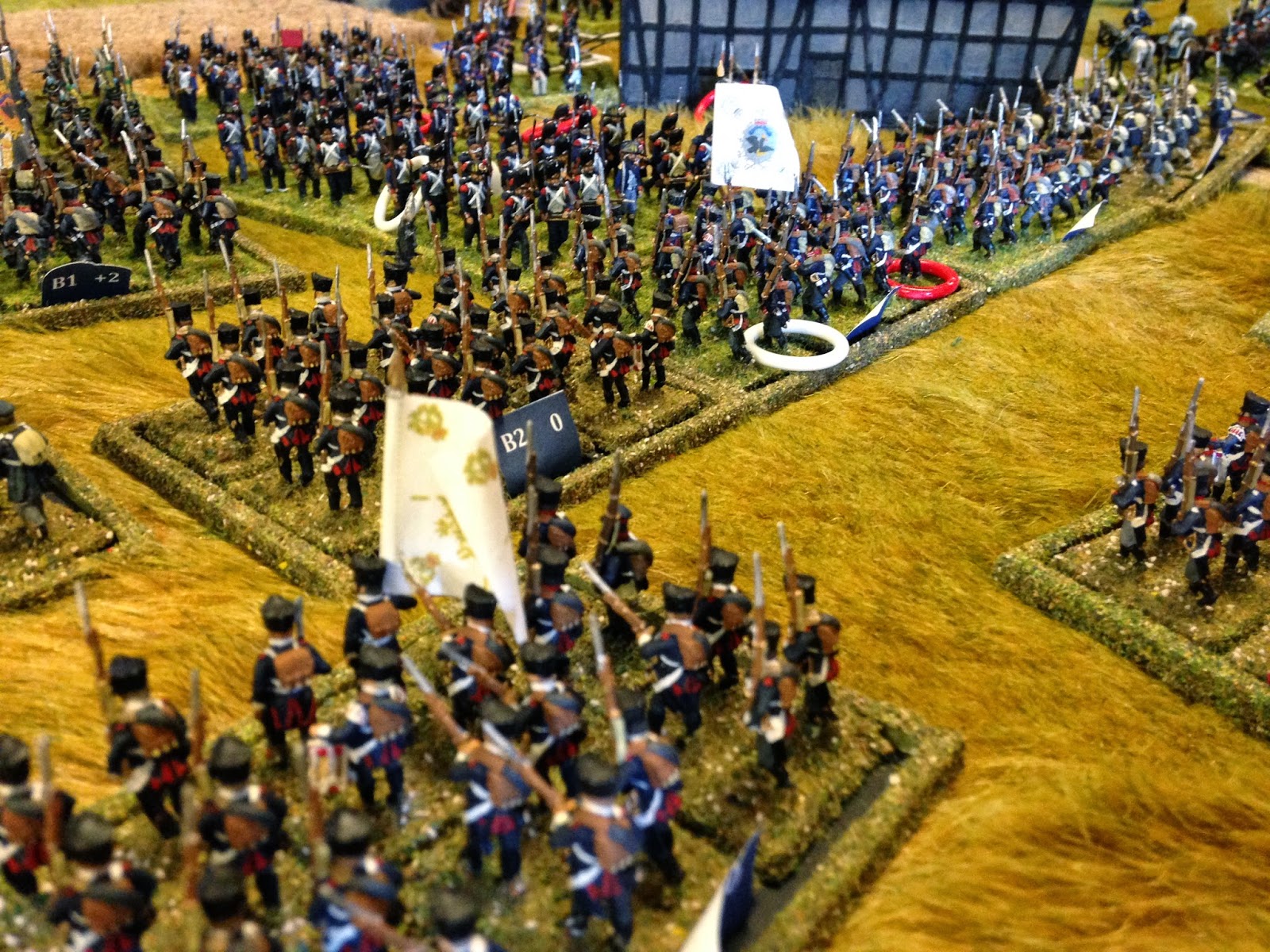 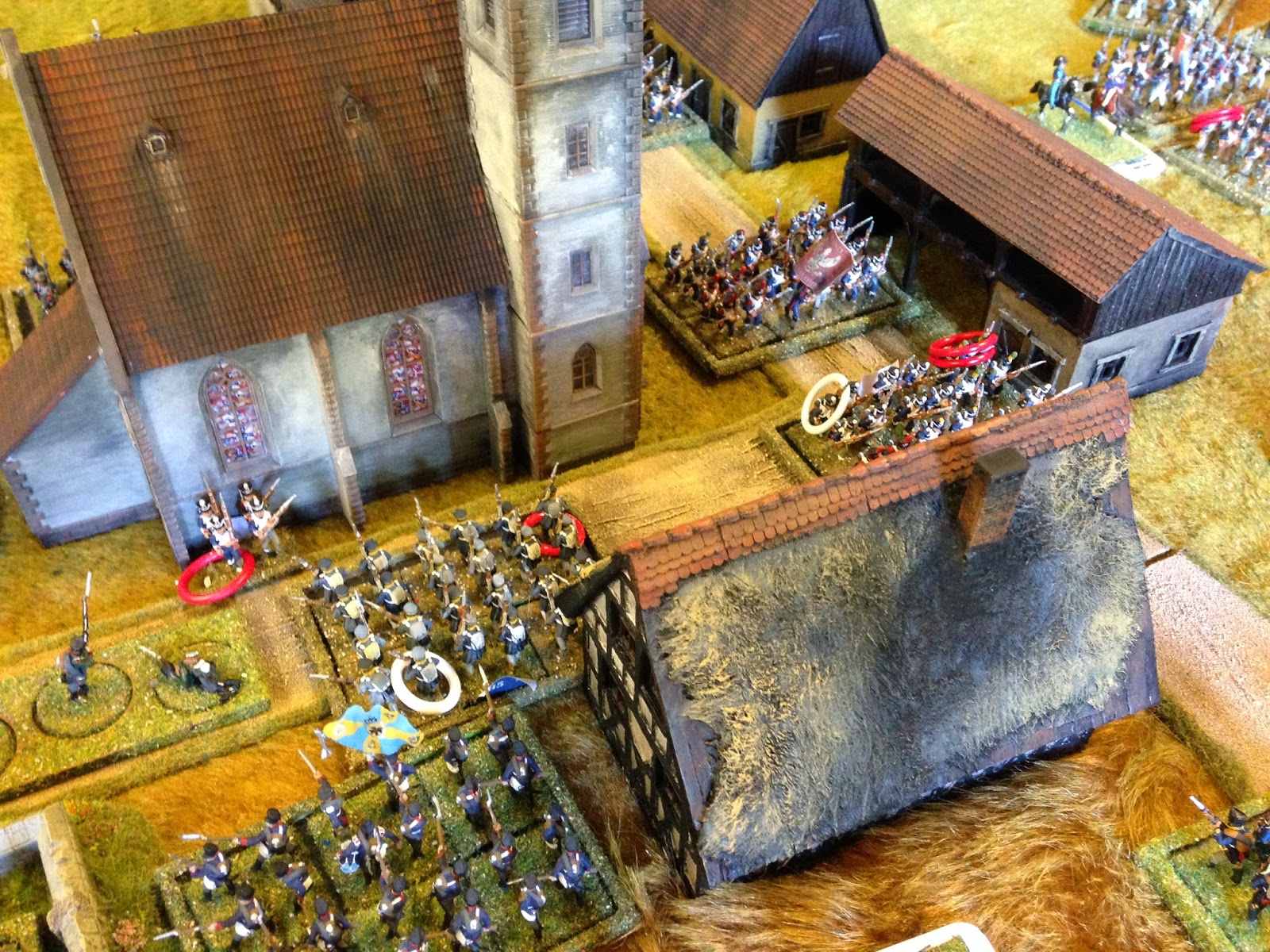 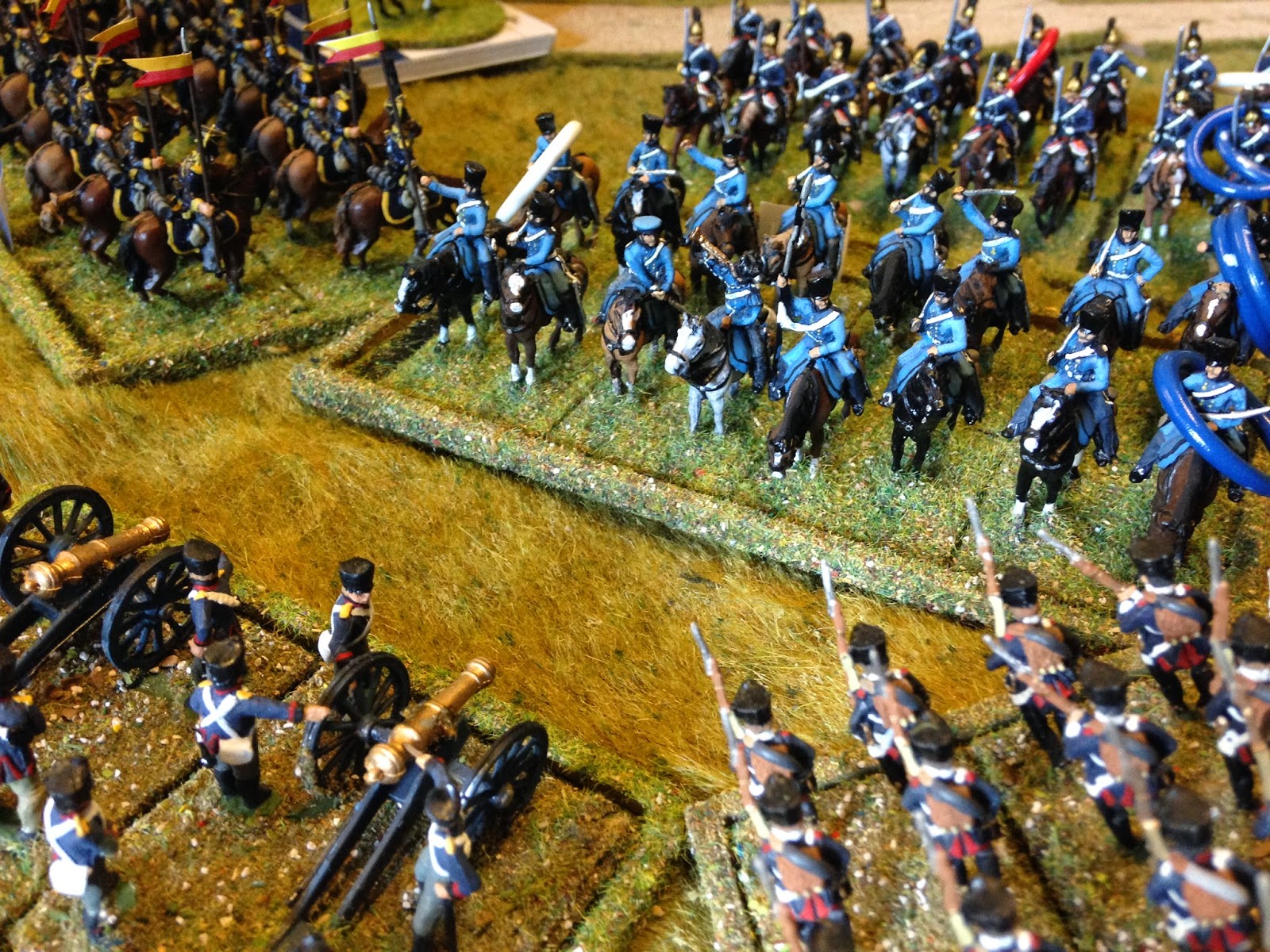 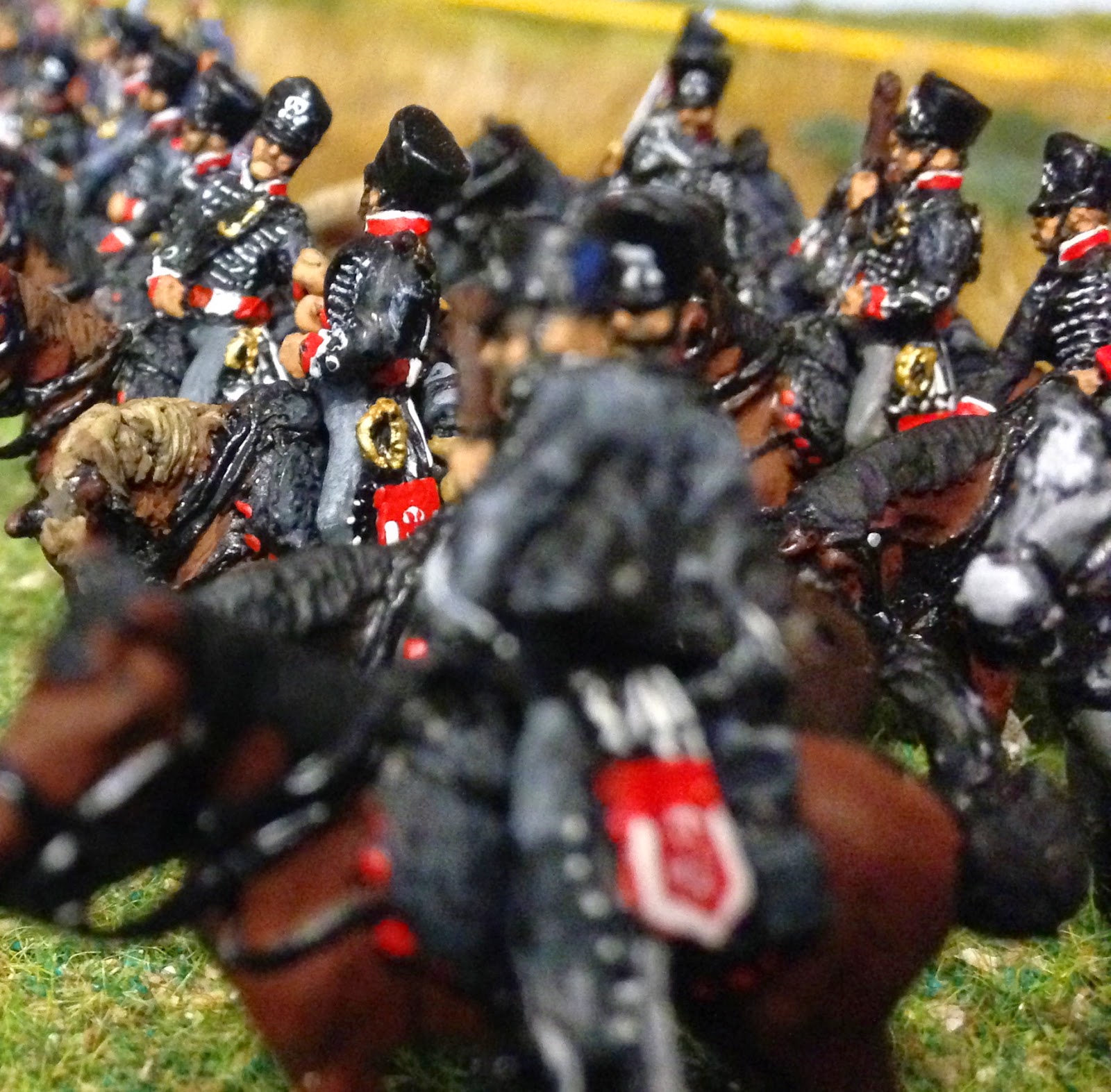 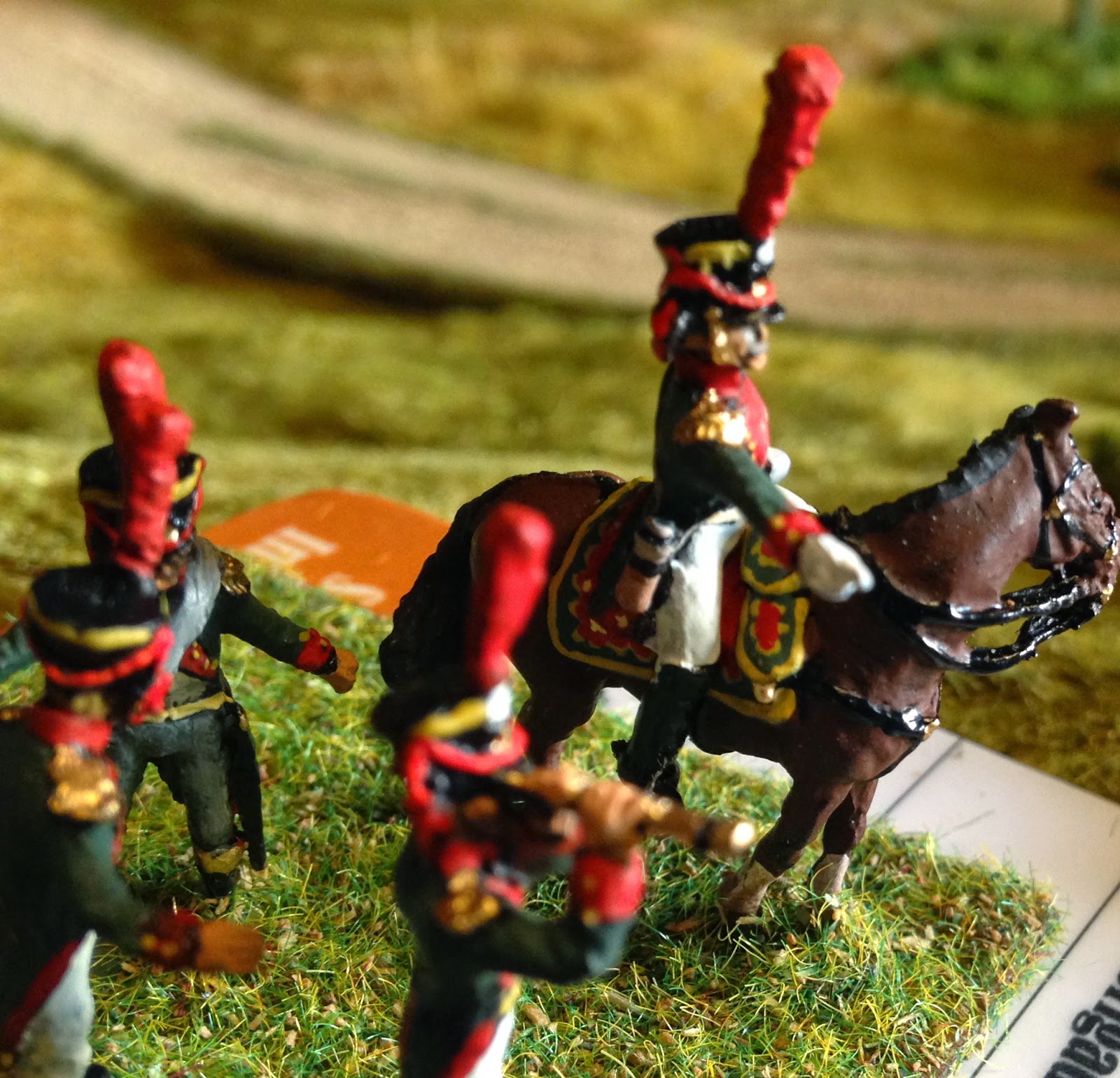 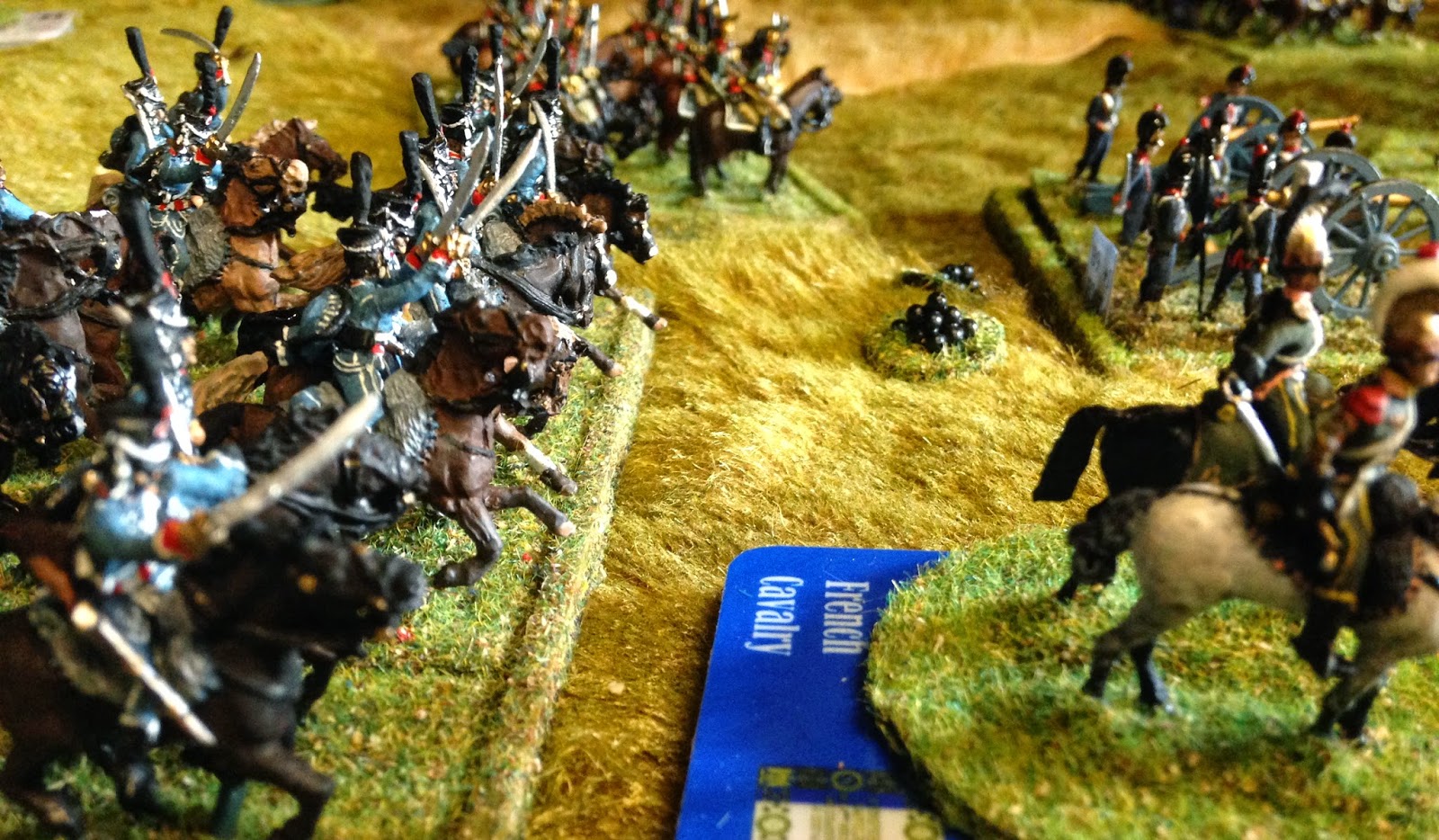 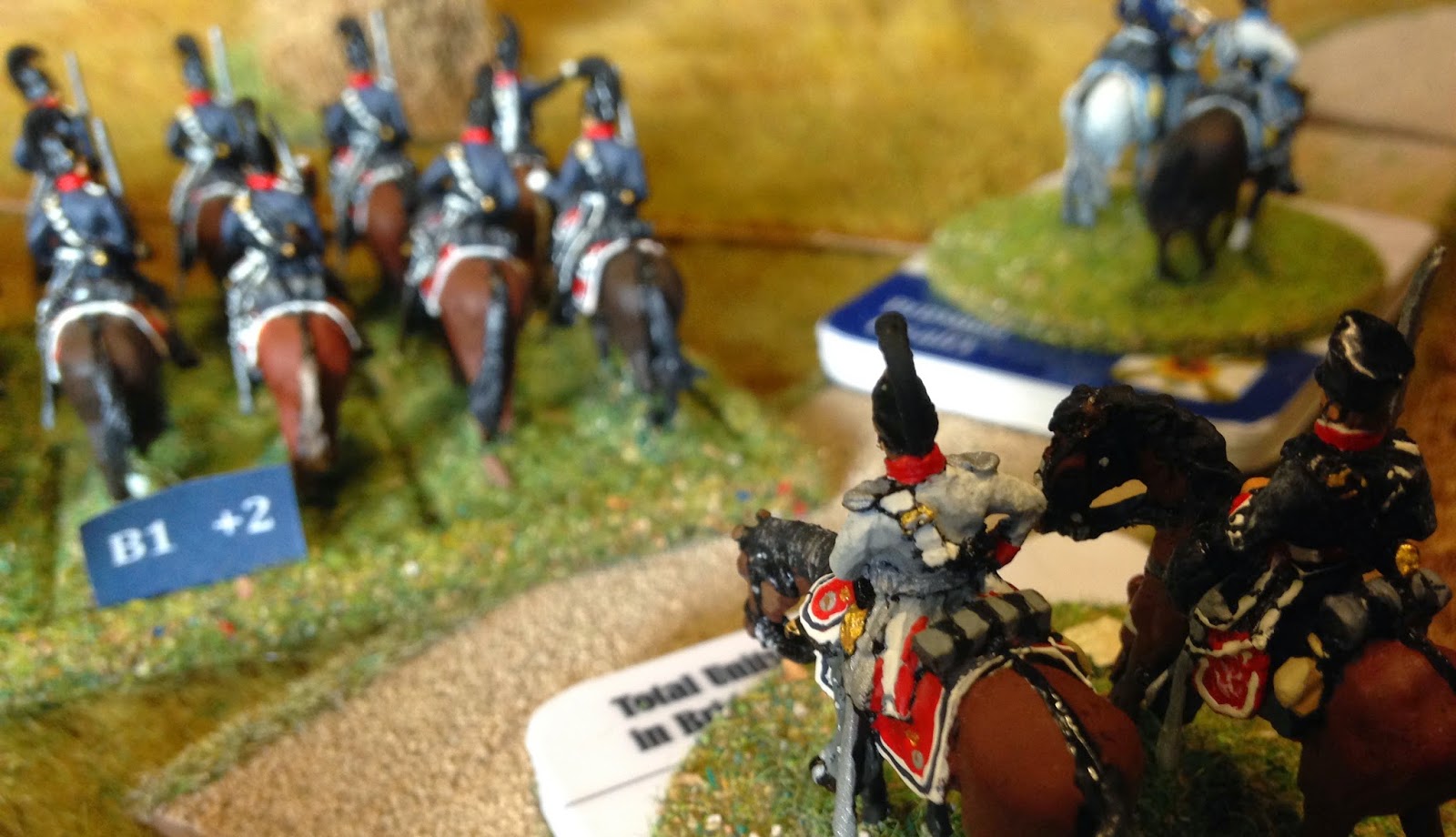 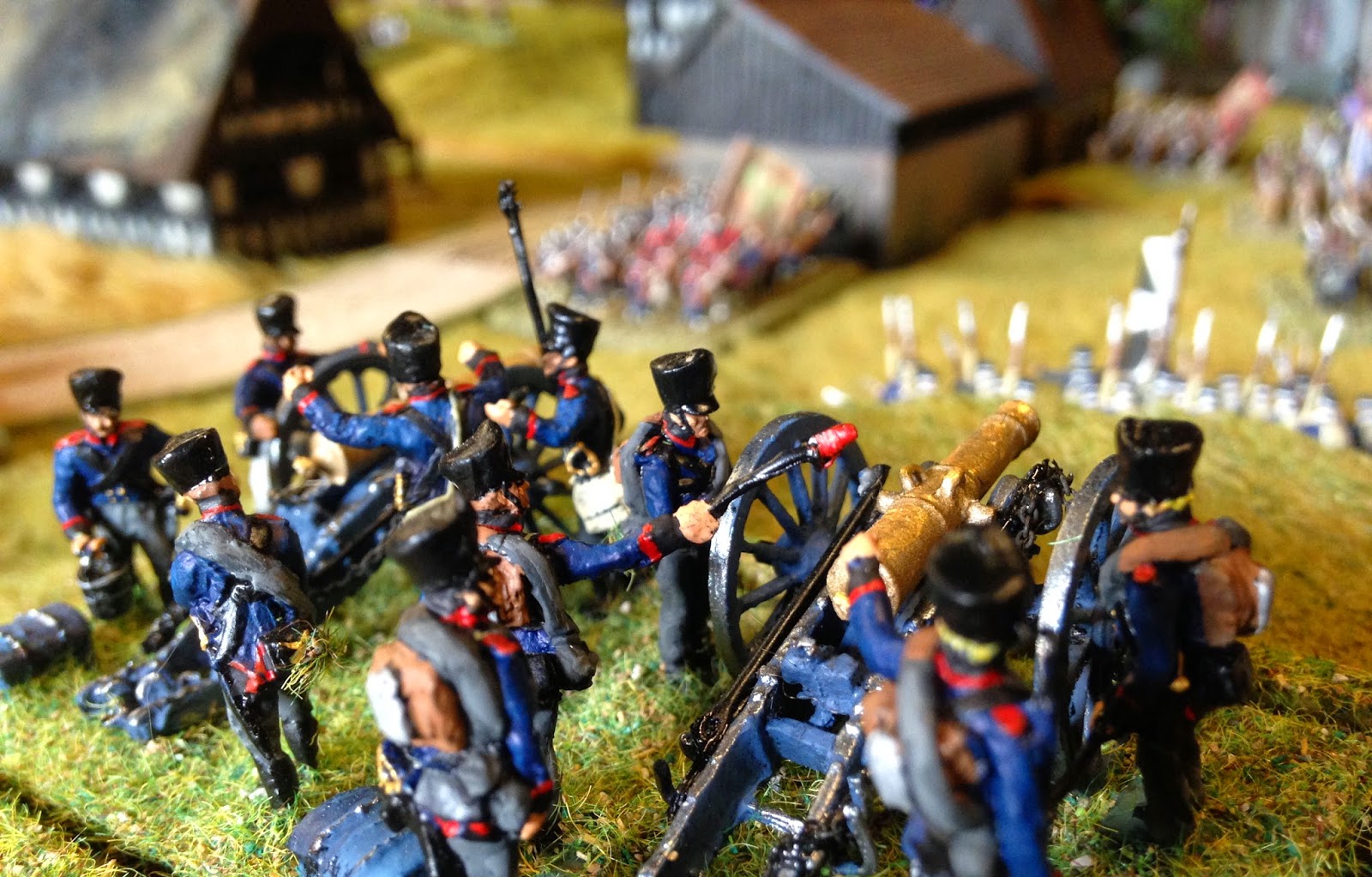 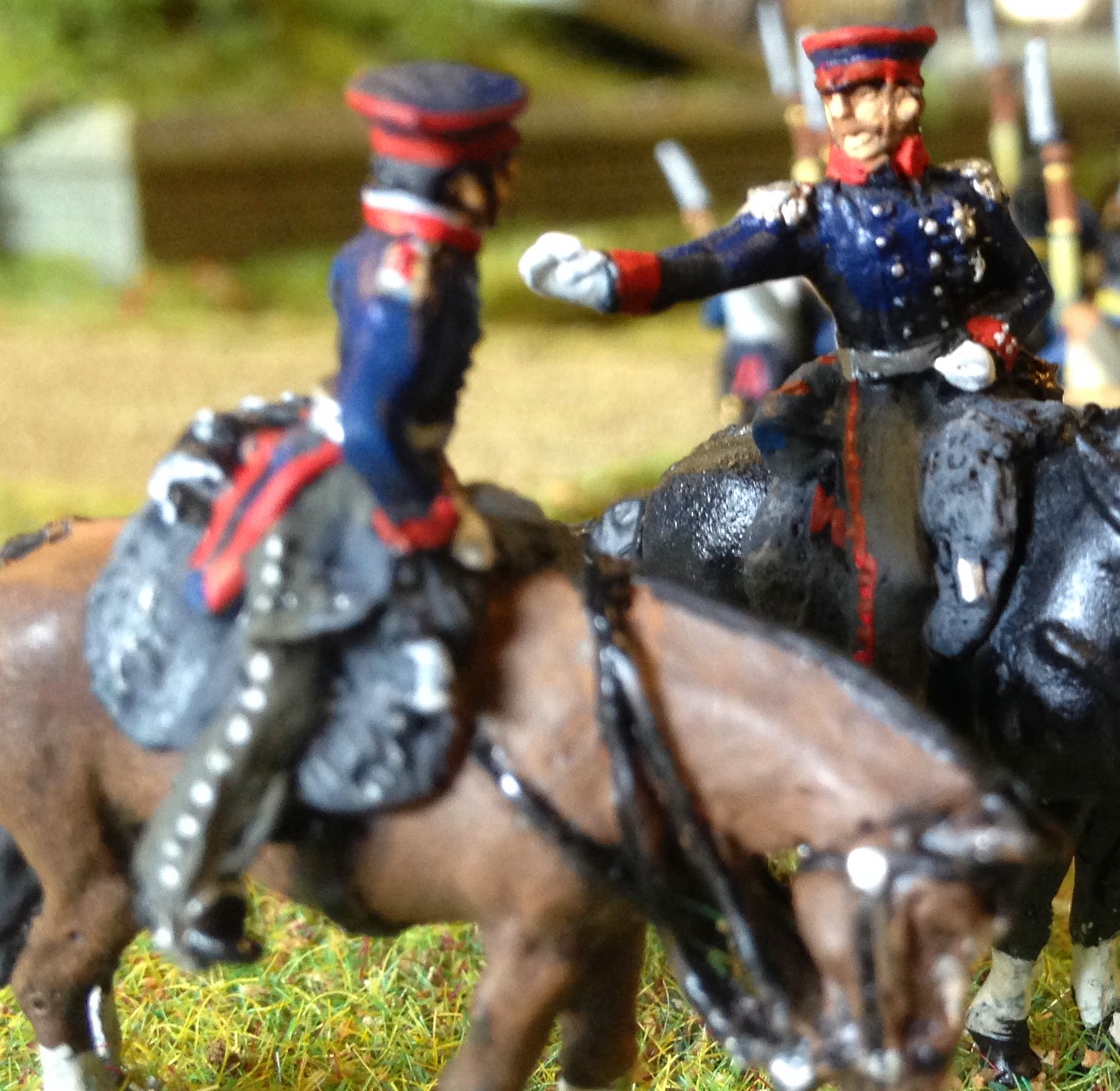 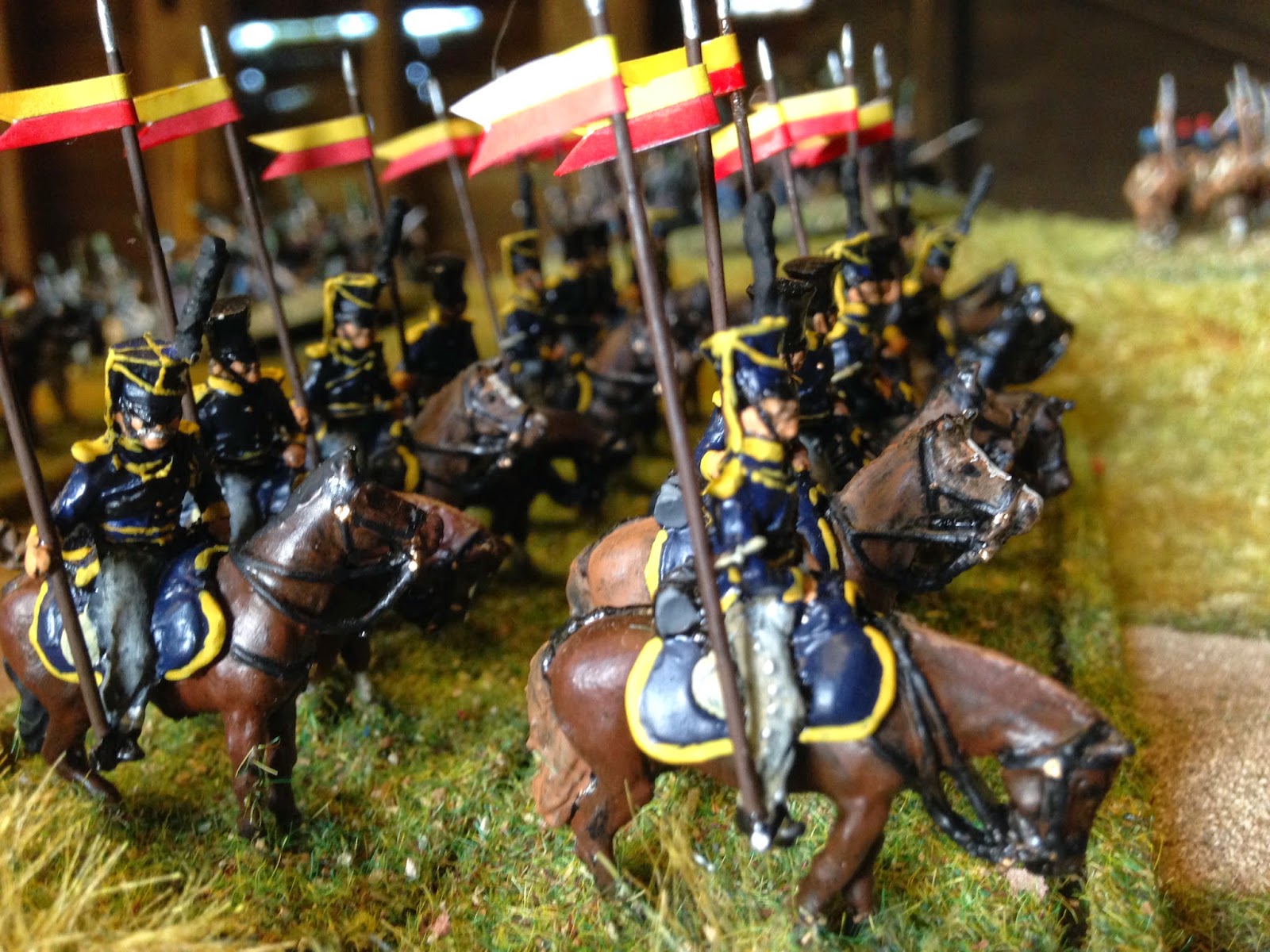 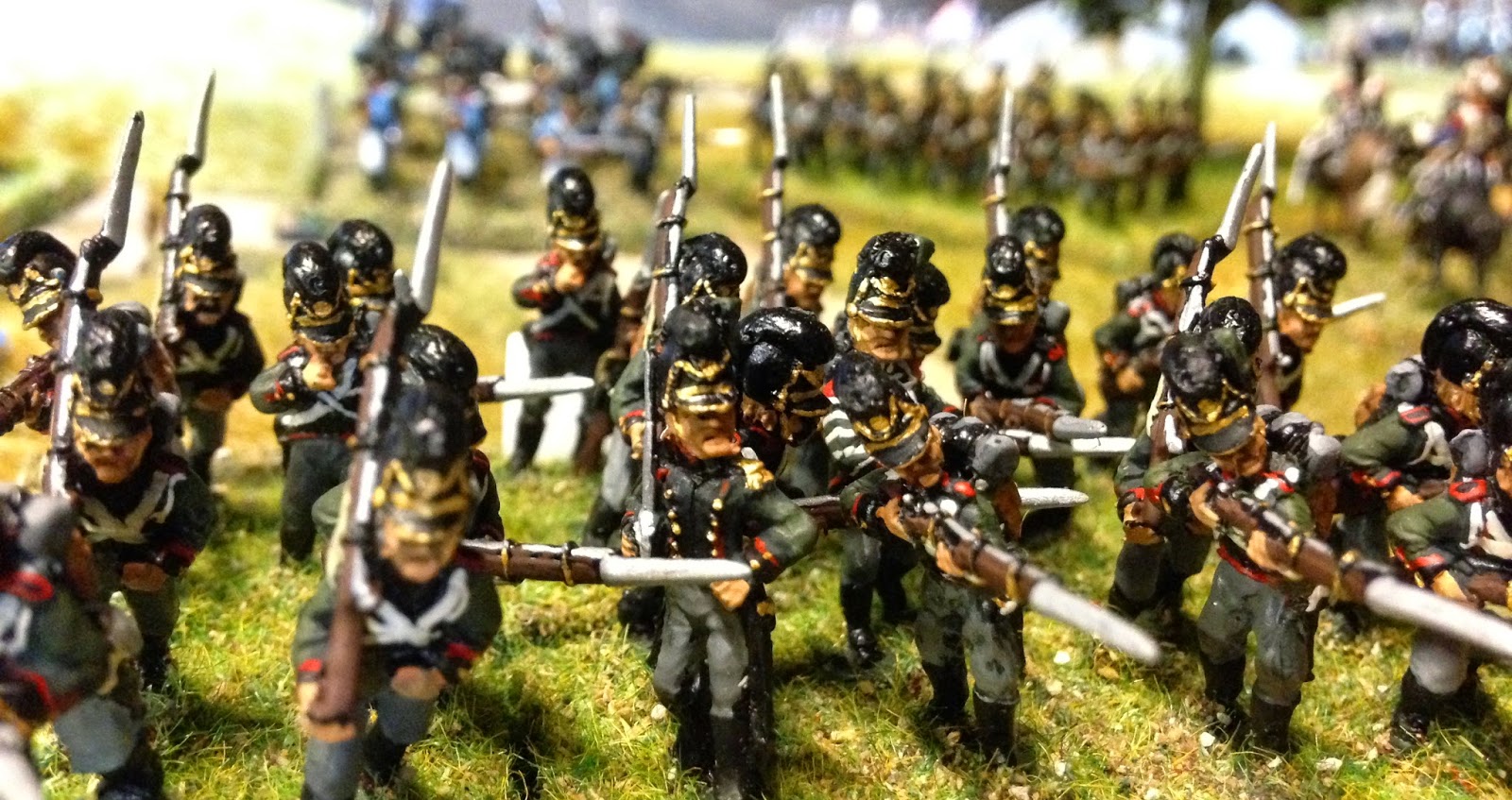 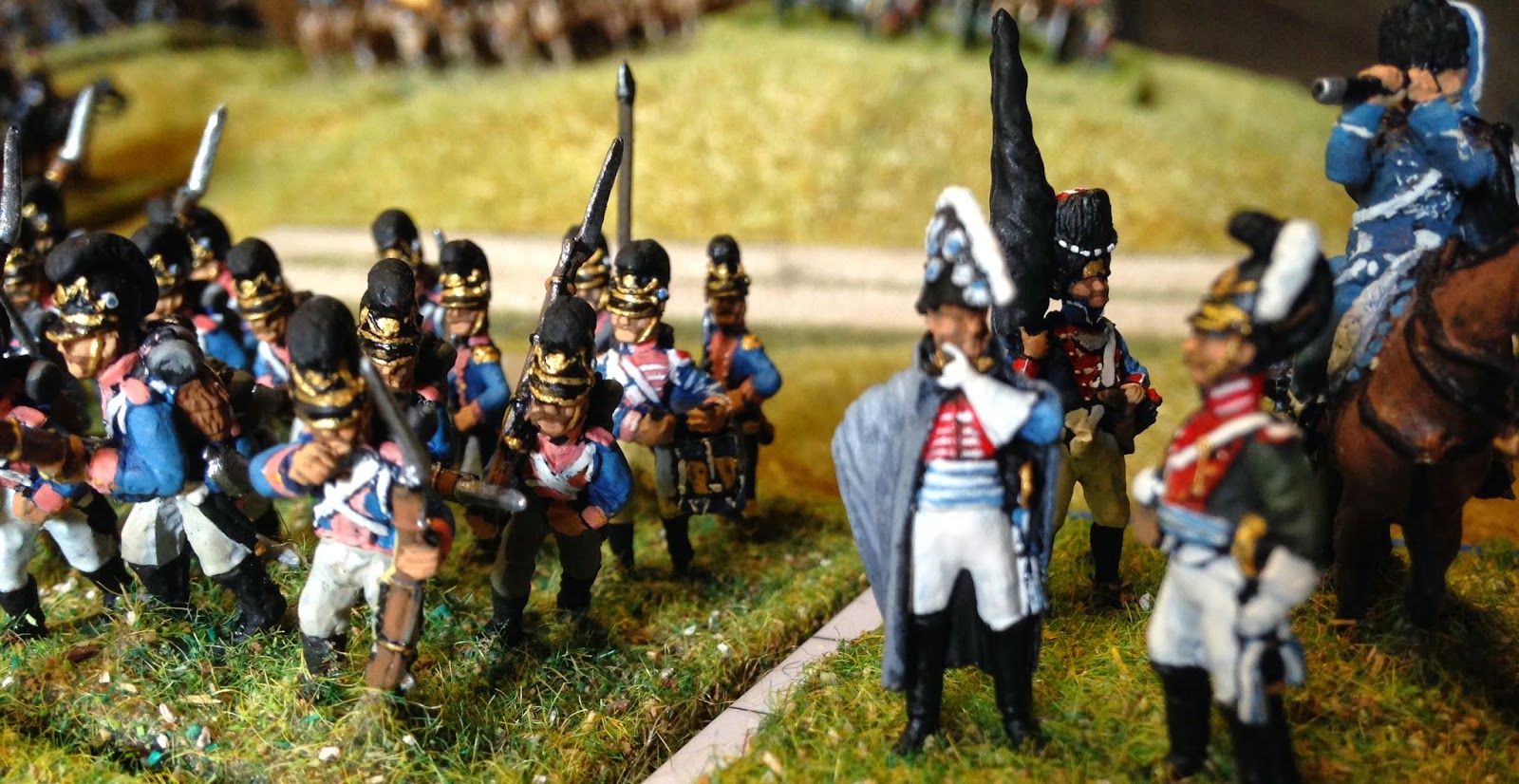 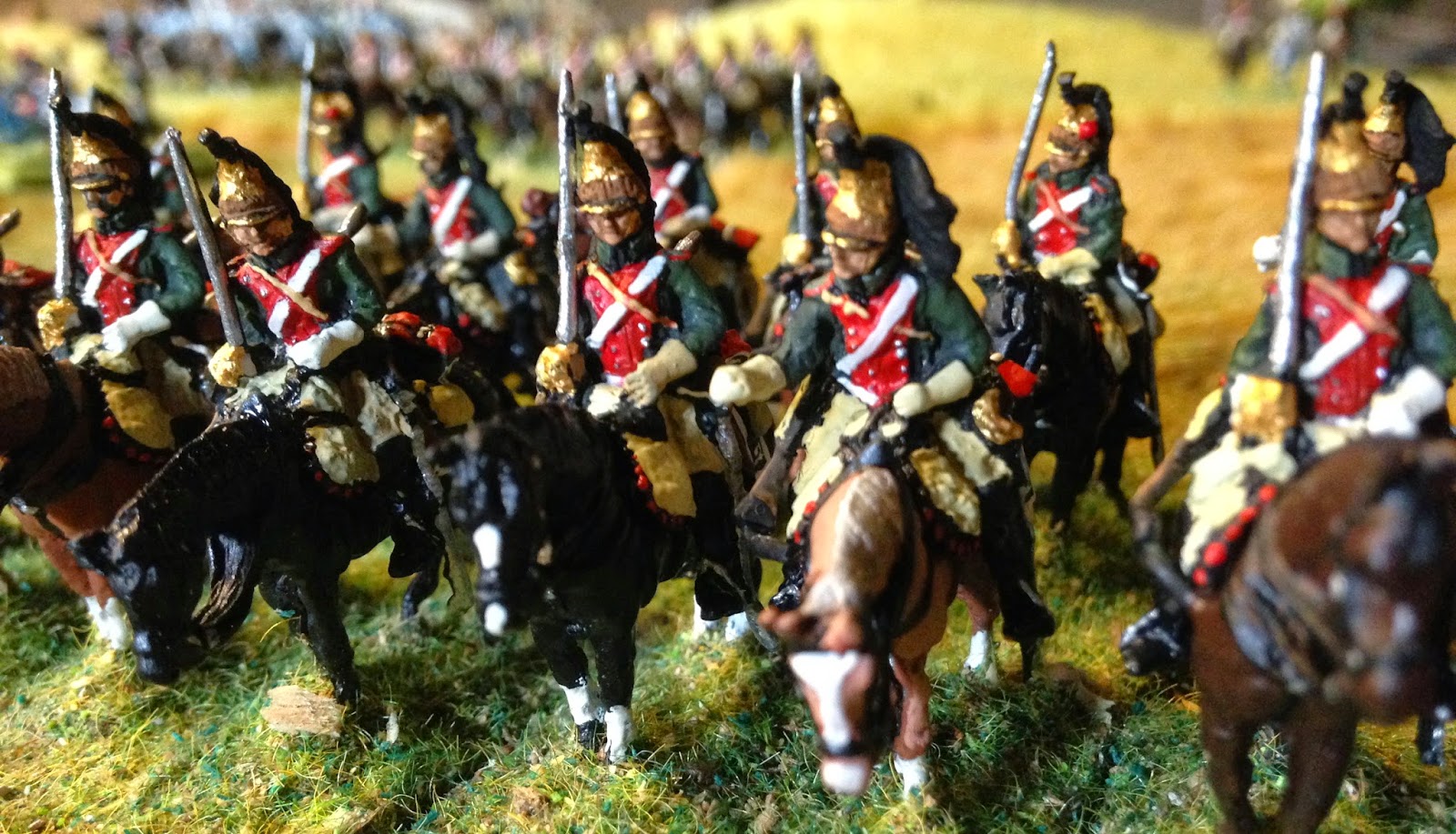 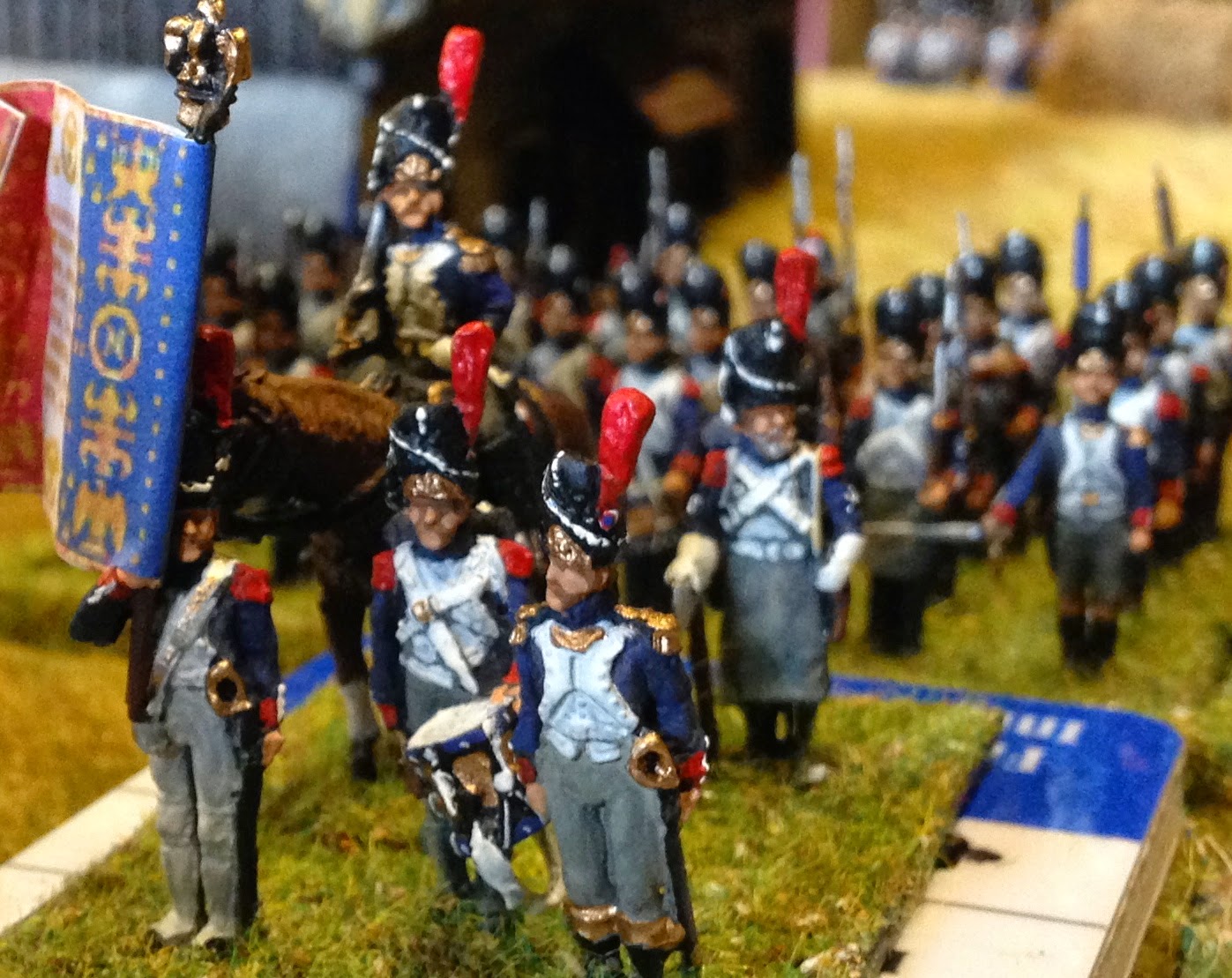