Now completed 6 battalions (3 regiments) of Austrian (German) line infantry. I think they were the 1st, 11th and 17th Regiments. Also 2 battalions of Austrian (Hungarian) line infantry. "Shocking pink" facings according to Funken but red according to other sources....of the 52nd regiment which should have yellow buttons rather than white. No matter.  Plus 2 Landwehr battalions supporting the 11th and 17th Regiments.

The Hungarian trousers are a bit bright for my liking and the grey undercoat a little too dark for the coat, but they stand out better when painted in this way.

The Hungarian Art Miniaturen figures had 10 different standing poses excluding the NCO with musket at the horizontal and excluding the command figures. Excellent variation from Art M.

I included a Hagen officer in the Austrian 1st Regiment, with his arm raised. 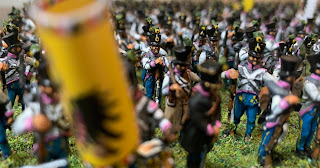 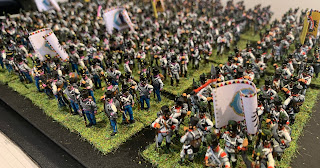