Creating scenarios that "work" can be fraught with difficulty. Even with a table of 22 feet in length there was still a problem of congestion largely caused by whole divisions coming onto the table in one mass rather than appearing piecemeal. Anyway, losses this time were slight and this ought to have been a two day game to allow units to get involved.

There would be 3 objectives, the village, the farm and control of the bridge (over the stream). 3 points for each. However, if one side should lose a whole brigade we would deduct one point.

The Village. (Obj 1)  The Polish division was supposed to have attacked the Prussians who had a head start in the village.  Supporting French cavalry on that flank didn't help much as Prussian infantry could scamper into the village and the limited Prussian cavalry available merely decided to fall back in the face of superior numbers. The Polish advance towards the village was halted by a solitary skirmish base and a battery of artillery. Hits and disorders in the same move, coupled with a poor throw on the 1D8 when the Poles desperately needed to pass their Brigade test, proved their undoing. The Poles did secure two buildings closest to them from the off, but this was expected.

The Prussian Guard came into action towards the end of the game but we never really found out how they might perform vs the Poles.

Allied cavalry superiority in the centre stifled the French advance and reserve division. The Allied assault split the French forces in two. Not even a brigade of French Carabiniers could stop Prussian Cuirassiers from making headway.

The Farm. (Obj 2). A combination of Old Guard and Bavarians took control of the farm. One  Bavarian brigade initially over reached itself and the lead battalion fell victim to some Prussian dragoons. But the calamity was short lived and the dragoons failed to breakthrough and wipe out the second Bavarian supporting battalion, which would have damaged the brigade's ability to perform.

On the other flank, French cavalry succeeded in pinning down the Prussian advance, while the French batteries on the hill shelled the squares. This was effective and meant that the reserve Austrian division was held up in the process. Later in the game French Old Guard battalions broke through the Austrian lines and succeeded in reducing the effectiveness of one German (Austrian as opposed to Hungarian) infantry brigade by 50%. Allied cavalry plugged the gap.

The bridge. (Obj 3) The Prussian flanking operation to take the bridge took time. The isolated brigade with HA, failed twice to move when ordered. Not enough friendly troops to encourage them. Had the French moved some skirmishers or horse artillery to confront them they might never have arrived at the bridge at all. In the end they did and flanking fire against the Bavarians was proving timely in the end.

Ultimately, the Prussians retained control of 2/3rds of the village (2 points vs 1). The Allies failed to take any of the farm (0 vs 3) but did arguably control the bridge (3 vs zero). The Allies, however, had lost 2 whole brigades vs the French one. So….an honourable draw. 3-3. I wonder what day 2 might have yielded? The French would probably have held the farm and eventually taken the village. 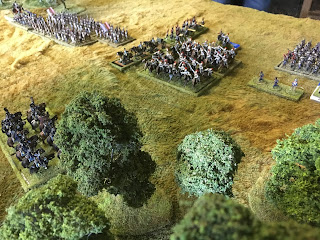 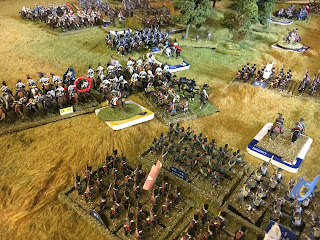 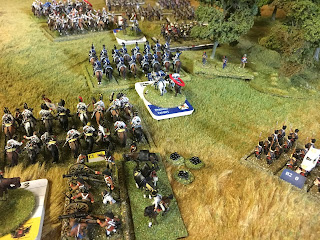 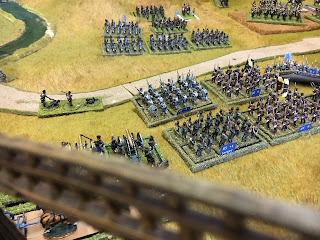 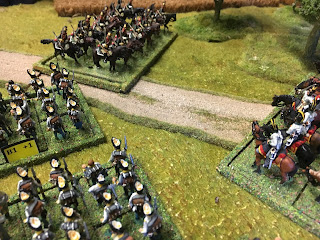 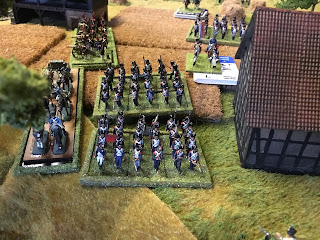 Trying to create evenly matched sides is a little tricky, especially where the larger Austrian battalions are involved.

Hopefully there will be one large Austrian Div (3 brigades) and three smaller Prussian Divisions (each of 2 brigades) The French will have a similar number of brigades in total, including a Polish Div (2 brigades), a Bavarian Div (2 brigades), two brigades of YG, one brigade of OG, and two French line brigades. The French (largely because of the Poles) will be of better quality so I have given the Allies an extra Prussian light cavalry brigade and an extra Prussian foot battery. Any excuse to get more limbers on the table. 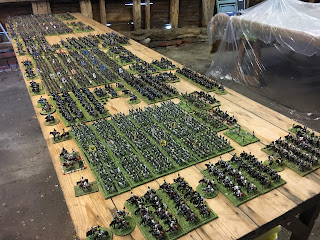 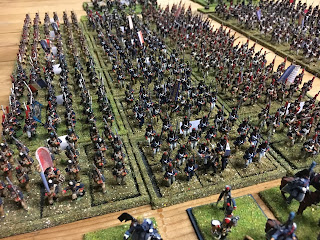 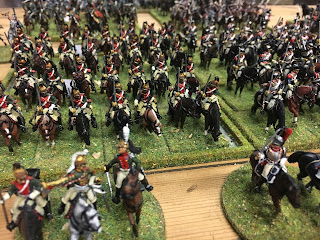 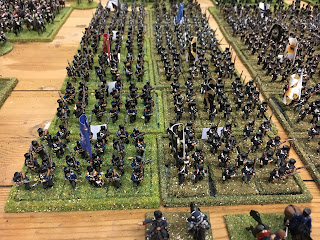 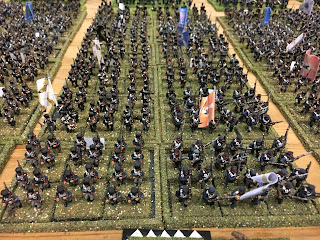 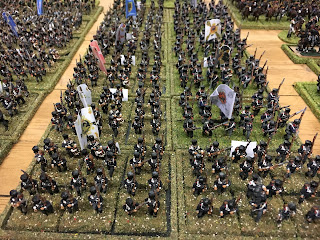 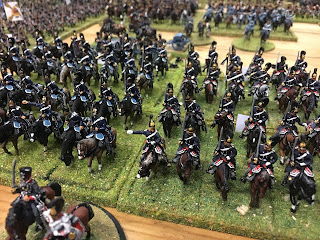 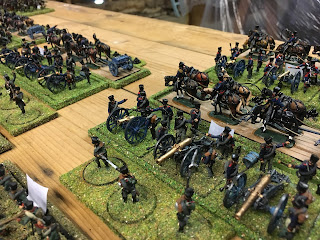 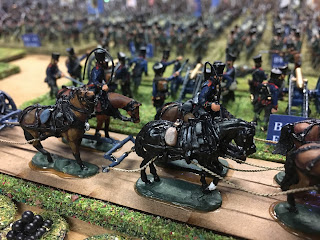 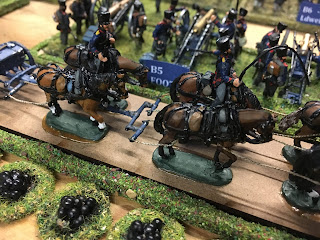 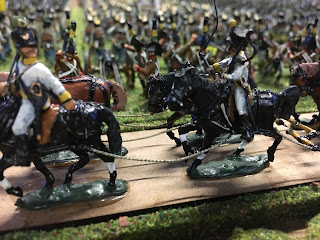 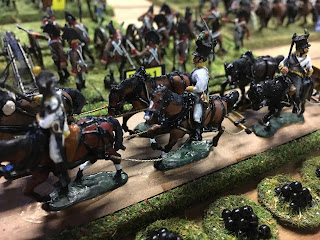 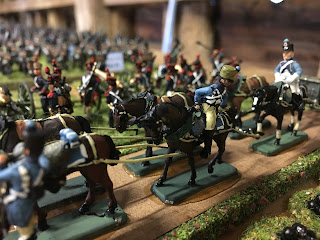