Forget for a moment that the Newline figures are not particularly well painted and that I should have perhaps focused more on the horses, but the picture below demonstrates some of the basic differences between the Newline and Art Miniaturen figures.

The Art Miniaturen figures are slightly larger but on a large table not drastically noticeable. The Newline pose variation is limited, while the Art M variations are excellent. This added to the addition of the riders' whips make the Art M figures a cut above Newline.

In fact the main problem between the two manufacturers is the quality of the horses which I referred to earlier. The Newline horses have limited poses and are ponies rather than horses. When these are finished I will try and make this point more clearly demonstrated. 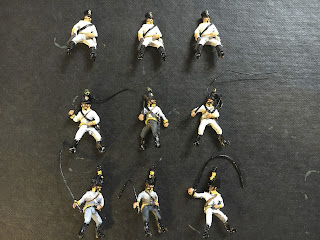 Rob hosted an excellent 15mm Napoleonic Peninsula game at the weekend in London. We used a modified version of the shako rule set. Phil supplied the figures. He has 15,000 painted and another 15,000 to be painted.

This was a 3 days battle. Pictures for day 1 and day 2 below. I have no idea what happened on day 3!

Two Spanish Corps were to defend 3 villages against 3 French Corps. The Spanish were pre-deployed while the French had three narrow ravines to enter through which made initial deployment difficult. 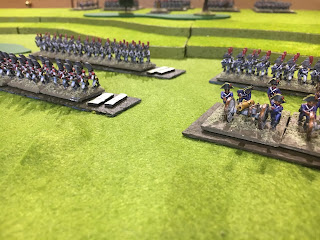 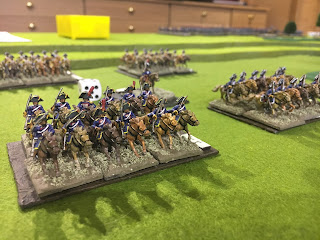 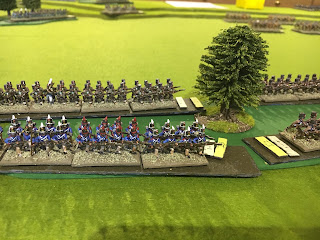 The French game plan was to use the cavalry they had available to their greatest advantage, in the centre/right. The French left and centre was wooded and offered less opportunity to attack across a broad front.

Initial French deployment of their artillery was a disaster when we found out that artillery could not fire over the heads of their own men unless from hill to hill. Several batteries simply had to limber up and move on. 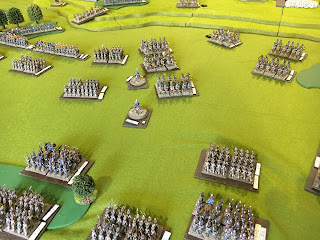 The British finally appeared on the Spanish right rear but by then the Spanish centre had already been smashed and the Spanish left was being sandwiched between the French assault in the centre and the French Corps which was now making progress across the stream. 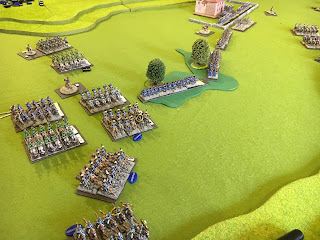 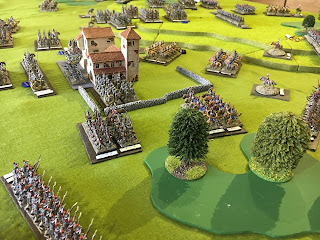 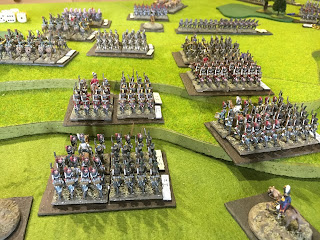 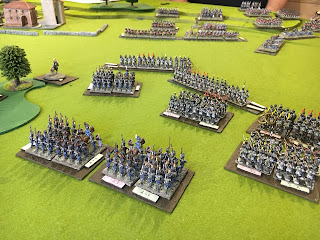 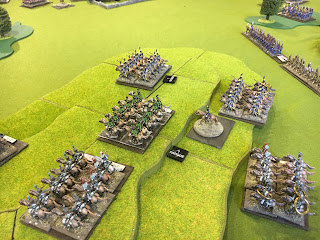 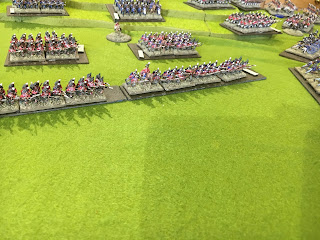 By the end of Day 2, half the Spanish ceased to exist. British re-enforcements were able to hold the line on the Spanish right but the Spanish in that sector had already been able to largely hold their own. The problem lay in the centre and the Spanish Corps now cut off and slowly being reduced in size and capability.

The French ought to have done better against the Spanish. Had the British come on earlier and appeared in the sector where they were most needed (in the middle) then the Allies may well have produced a win. But since I was not present on day 3 I have no idea whether the French did indeed win or if more British were to appear and save the day.
Posted by Unknown at 03:19 2 comments: