Having the luxury of setting the whole shooting match up in advance is a major plus. Tabbing up each unit is time consuming though. Hopefully the command bases, once covered with their respective command stand, will not detract from the overall effect. Thankfully the movement trays make life so much easier. Looking forward to seeing everyone arrive on Saturday morning. I will be posting a de-brief of the game. 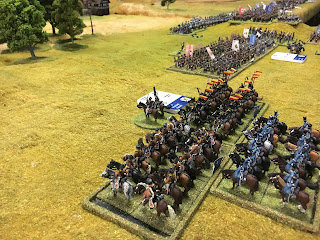 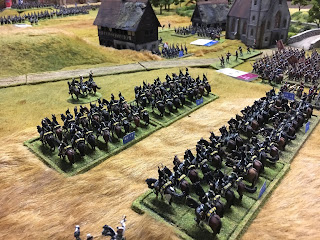 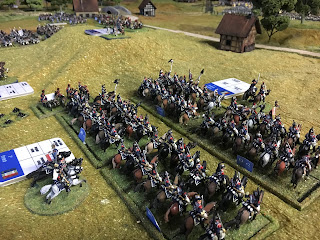 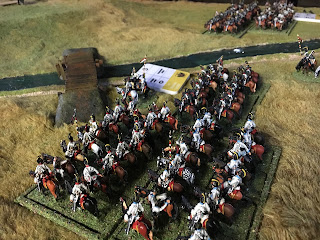 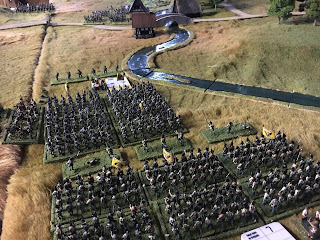 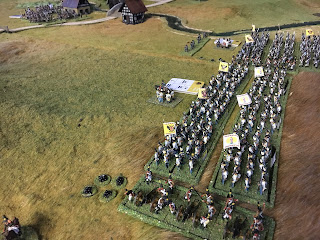 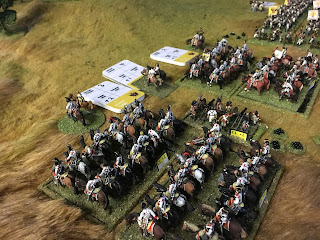 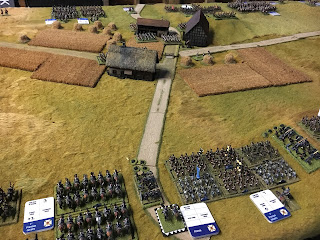 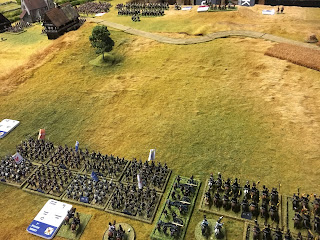 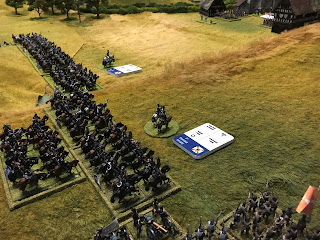 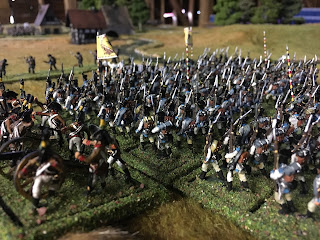 SCENARIO:
Based on (very loosely) a small central sector during the battle of Dresden  26th – 27th August 1813.
FRENCH: Have been given the task by their Corps commander (Marmont) to prevent superior Allied units taking the 3 villages of Plauen, Bachnitz and Strehlen, which lie to the south of Dresden. He has assured them that reinforcements are to the rear in Dresden and will be available in 24 hours time.
ALLIES: Are to spearhead an assault on 3 villages and attempt to hold these objectives for 48 hours. 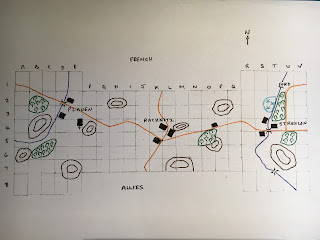 How each side handles Day 1 will be crucial to their success or failure on Day 2.

DAY 1. (10 moves)
·      FRENCH OBJECTIVE. To hold as many of the three villages as possible.
French units will deploy first, anywhere up to the centre of the table. Guns may be limbered or unlimbered.
·      ALLIED OBJECTIVE: To take the three villages from French control.
Allied infantry units will start where placed by the umpire. However, once the French positions have been disclosed, Allied cavalry brigades may re-position to anywhere along the baseline.
·      OVER-NIGHT.  French and Allied units will begin day 2 from where they left off on Day 1 except that Allied cavalry brigades may move to new positions up to the middle of the table. This may be limited to units that have NOT been committed / or suffered no casualties the previous day. This might encourage commanders to think about the consequences of rash decisions taken on Day 1.
·      HALF TIME BONUS!
Command ratings: If an Allied/French infantry brigade manages to capture/hold an objective by the end of day 1, the BC and DC will receive +1 to their command rating. Applicable to each objective.  No change if Commander is already rated as +2.
Artillery rounds: Both sides may re-allocate effective artillery rounds between batteries overnight. Also, each village holds a French reserve supply of five effective rounds of artillery. These will be hidden in one building in each village. (Allies will not know which building) At the end of Day 1, whichever force holds that building, will receive those five rounds and may allocate freely, prior to Day 2. If the building is set on fire during the battle forcing the occupants to leave the building, the supply will blow up and neither side will gain from the re-supply.
Disorders: All disorders are removed, before Day 2 begins.

DAY 2. (10 moves)
·      FRENCH REINFORCEMENTS. Considerable French re-enforcements will appear at the beginning of Day 2 with some element of dice luck as to where they appear, either from the front or flanks. (not to the rear of the Allies)
·      FRENCH OBJECTIVE: To take back those villages lost on day 1 and continue to hold any that were held on Day 1.
·      ALLIED OBJECTIVE: To hold those villages won the previous day.

Units in cover: Hills, buildings and woods may hide units. (umpire to monitor) Waterflows (tributaries of the river Elbe) are either classified as “rivers” or “streams”. Units adjacent, will discover which. French forces are already aware which is which.

The winning side will be the force that holds all three villages at the end of Day 2.
Posted by Unknown at 10:35 No comments:

Terrain being prepared for the game on the 4th and 5th June. Just trees and troops to be added. Two ping pong tables (9x5) at both ends with a pair of pre war trestle tables that the village hall threw out for health and safety reasons (too heavy) in the centre (12 x 6). One ends up with a great space of 22 feet long and 6 feet wide, though wider on the flanks, but still accessible... 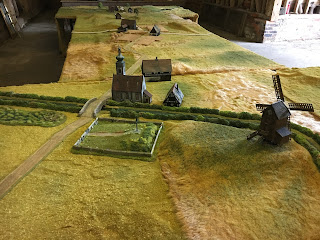 Very loosely based on the battle of Dresden, we will be enjoying a large scale 20mm game on both the 4th and 5th June. Looks like there will be 6 or so players with plenty to command.

Prussian limbers to come….painted/primed with the black matt Painters Touch spray can. The resultant finish is satin rather than matt (though the photo makes them appear more gloss) which is perfect for Prussian oil skin covered shakos, leather, reins, helmets and the odd black horse. Idle I know.

Hopefully Art Minituren will produce some French line mounted chasseurs in similar static poses as these Austrians. The most numerous French cavalry is at the moment missing from their website, but would be a welcome addition. 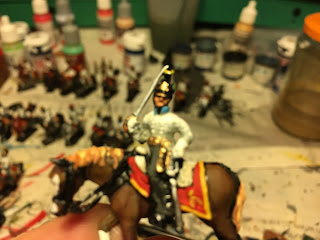 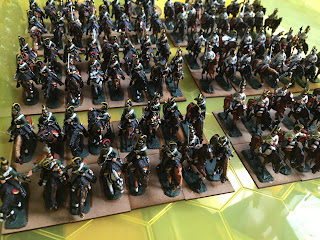 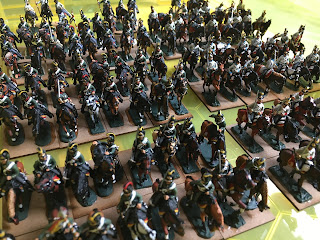 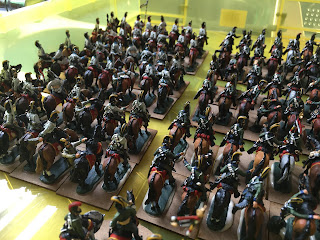 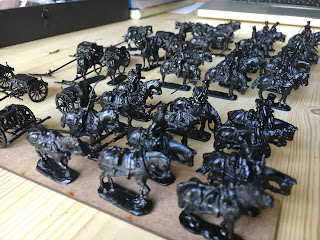 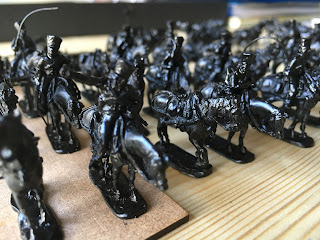