Napoleonic game due on August 12th

A made up scenario, bearing a slight resemblance to Lutzen, but only in a vague way.

A French Corps has been taken by surprise by an Allied pre-emptive attack. 3 French Divisions quickly attempt to concentrate their forces and defend 3 key villages against a Russo-Prussian force. 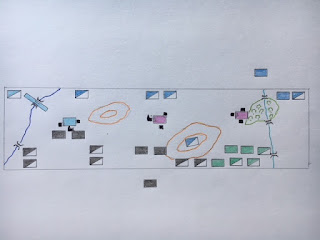 On the extreme left is a Bavarian brigade which will already be in action against Prussian units from move 1. The 2nd Bavarian infantry brigade is rushing to its aid, but will be in the process of crossing a bridge (over a river) and may have problems deploying. In the centre and right are two Polish brigades, quite far apart from each other. The Polish Divisional commander may not be able to support both his brigades at once. The table will be 24' x 6'. Both Polish brigades will have to sustain the full force of the Allied attack but a French Infantry Division of two brigades will be moving to help their comrades. Part of this force will need to cross a stream, while the other will dice to see which side of the stream they will appear on. There is a forward French cavalry brigade (with HA) sitting on the hill in a forward position. They will need to decide quickly whether to launch an attack early on, or withdraw to safety.

The Allies will have 8 Infantry brigades. All will be a mixture of -1, 0 and +1. Two of these brigades will be +2 (Guard). The Prussian Guard's brigade will initially be off table, while the Russian Guards brigade, also rated as +2, is located to the rear right of the large hill, sandwiched between cavalry. Numbers will be approx 1,500 and will outnumber the French in infantry, cavalry and artillery.

We have 7 players attending....3 for the French and 4 for the Allies. Players will choose sides on arrival and I will be allocated whichever side is lacking a player. The scenario maker can't be allowed to choose sides! Then we will allocate brigade commander ratings:
(-1 x 2, +1 x 2, and +2 x 2, with remainder being 0)

Finally finished a 12lb and 6 lb artillery batteries for the Bavarian Division.

The snag with the SHQ 20mm figures is that the pack come in 4 poses only. The inclusion, therefore, of a dozen Franznap artillery figures seem to blend in well. 5 figures per foot gun. 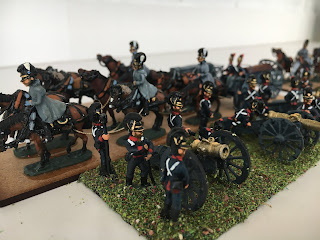 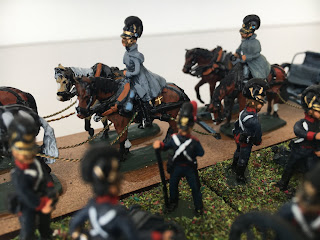 The artillery riders were achieved using Franznap French artillery riders in greatcoats, chopping their heads off and swopping with SHQ's Bavarian infantry heads. The horse and traces were all Art M. I think the limbers were SHQ (British?) I used twisted staples (!!) as the arm rests. The two chaps sitting on the limber were from Franznap. The caisson was an Austrian one from Art M.

looking at the pictures, I may have to paint the epaulettes?? Some seem to be missing.