It is often a dilemma as to whether to use artillery limbers or leave them from the battlefield. Bearing in mind the space used by a battery and that the depth was often greater than the width it seems logical that limbers ought to be a feature, even if just to make the game look more realistic. The reluctance is often based on the fact that it can clutter up the table and also the tedium in painting so many horses etc. But I decided to buy some Franznap 20mm French artillery limbers with some engineers wagons as well. 6 horses for the foot batteries and just 4 for the horse artillery. The width of each, if placed sideways behind the battery, fits nicely to the 3 gun batteries for foot and the 2 gun batteries for horse. Some of the limbers have no riders so I can place Guard/Polish or Saxon riders (detachable) as needed. Admittedly the Bavarian limber won't be the correct shade of duck blue but that can't be helped.

The engineer riders have been painted with dark brown trousers and blue jackets like the others. I believe the engineers had greyer coats earlier in the period….pre 1810 say. Not 100% sure on this.

Franznap produces very fine and detailed miniatures. The rope cabling was particularly fragile and gluing these prior to painting was a painful experience. A couple broke with the minimum of bending into place so reluctantly I have had to leave many of the linking ropes dangling into thin air. Putting them precisely where they ought to be will be a bridge too far for the pewter to withstand. Definitely better viewed from a distance!

I am sure there is a way of fixing this correctly but I just don't have the patience or the skill.

The sculpting of the figures (getting on the horse and twisting round figures) are particularly good.

They look pretty ok though. I'm not in the same league as some professional miniature painters and never will be...Art Miniaturen will be providing the Austrian, Prussian and Russian limbers in due course. Will be interesting to see how they compare. Franznap vs Art Miniaturen. 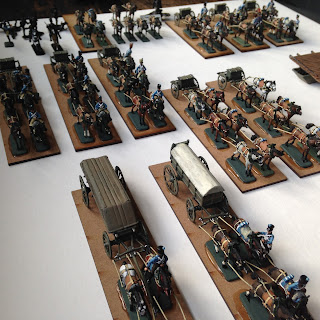 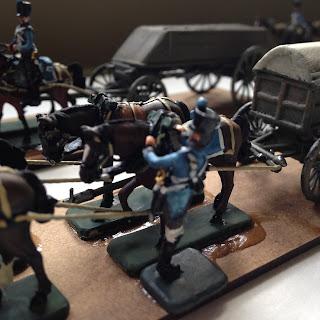 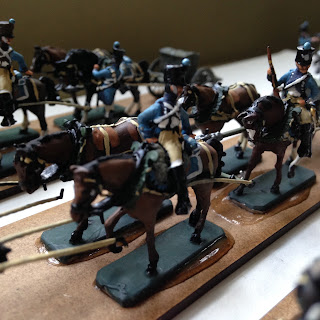 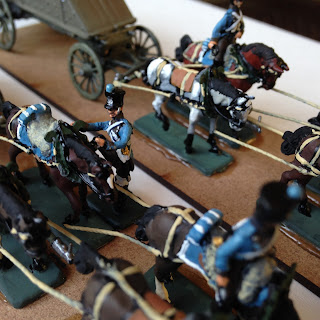 Last weekend we were lucky enough to be hosted by Rob in Ealing in west London for a game in his custom built "war room". Myself and Alan were given the French, Phil and Brian took control of the Prussians while Rob and Noel had the British.

Phil has an impressive 10,000 strong collection of 15mm Napoleonics and another 10,000 unpainted.

The French were given the middle of the table and the Allies were to attack from either side. A classic ham sandwich. The French decided to defend their left flank against the British, using the 3 reserve foot batteries to help, and attack the Prussians with 2/3rds of their force, including all the heavy cavalry, on the right flank. The Old Guard infantry and Guard cavalry would sit in the middle as a reserve but the Young Guard would be detached to assist in the assault on the Prussians.

Using a version of the Shako rules it was not made particularly clear by the umpire (who was wearing the additional hat of the British!!) how the initiative rule would be implemented. The French won the initiative and allowed the Allies to move first, the French playing last. But this state of affairs was to be repeated every move and so the Allies gained +1 in every melee for the whole game. Hmm….had we known!

The French attack the Prussians: (A French dragoon division of 8 regts held up well against the Prussian cavalry but were to end up being wiped out until French heavy cavalry was diverted to assist from the northern flank) 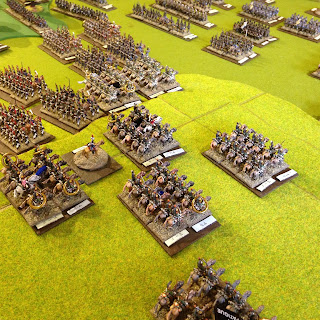 The French infantry assault in the centre initially did well but foundered in the wood. The French division in the foreground lost one unit and failed a subsequent morale test which sent the whole division packing. Fresh units never fired a shot! This was where the French should be winning…. 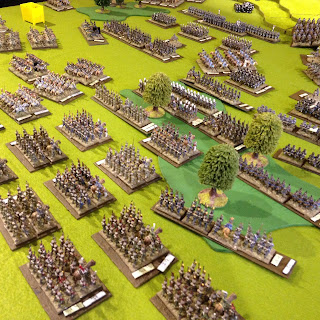 The French Guard cavalry, HA and 4 battalions of Old Guard with two foot batteries sat patiently in the middle waiting to see where and when they might be best employed. 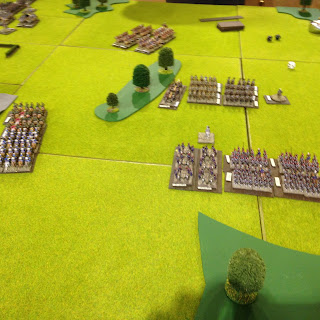 The British attack on the french left was speared headed by average troops which was perhaps their undoing. The French deployed a strong defensive position using the wood, hills and village to maximum effect. Breaking this down would never be an easy task. 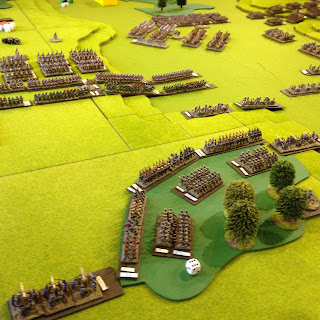 Four French foot batteries occupied the middle ground, persuading the British to focus their attacks on the flanks. 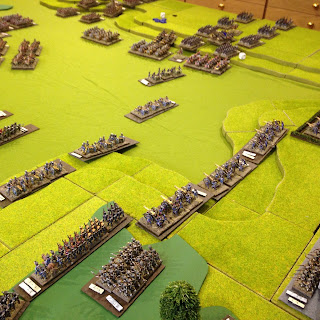 Close up of the French Guard reserve: 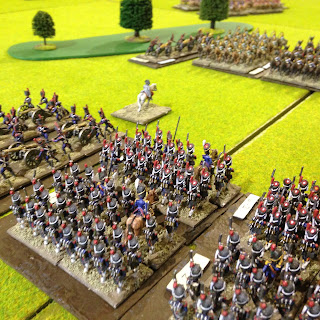 The French left flank vs the Brits: 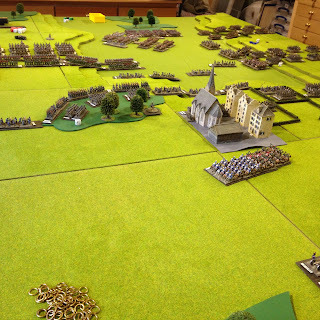 The French right flank vs the Prussians: 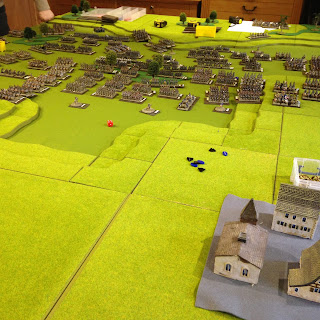 In the end the French finally broke the Prussians but this was only achieved late into the game. This allowed most of the French heavy cavalry and one division of infantry to move back across the table to assist the effort against the British. Only the cavalry would actually get their in time to make a difference.

The British attack in the south made heavy weather of driving the French light infantry out of the wood and one British division of average troops were routed in a similar fashion to the unfortunate French infantry division against the Prussians. One down and the rest fled. Just as the British were making gains in the north, they came up against the French Old Guard infantry and artillery which managed to send another British division back to the rear.

Overall a French victory. Had the British led with their best troops it might well have been a different story. Equally, had the French known about the initiative effects clearly, the same could be said.

Great fun and Rob's gaming room is an excellent venue.
Posted by Unknown at 03:18 1 comment:

Excellent news from the team at Art Miniaturen. They have recently released some Austrian Dragoons which could just as easily be painted as Austrian Cheveuxleger as this latter group had both green or white jackets. 12 different poses.

There are also some other odds and ends including Polish aide de camp and Bavarian sappers. Take a look at their website for more information. 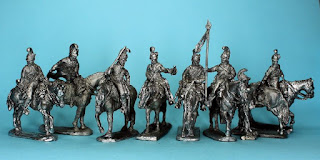 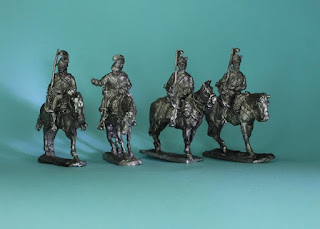