Bearing in mind Marmont had quite a few naval artillery regiments in his Corps at Lutzen...notably in Compans and Bonnet's Divisions....it was worth painting up a couple more battalions. They turned out nicely....tried to keep the greatcoats as dark a blue as possible but decided to go with white cross belts (instead of the favoured and cheaper black ones by 1813) simply because they stand out better. Plus two skirmisher stands. 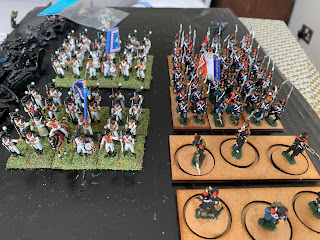 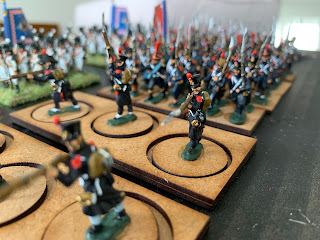 Fressinet's Division in MacDonald's Corps will feature two battalions of the Neopolitan velites courtesy of Franznap. I appreciate that this Division had other French units but no harm in a little artistic licence. These figures were a delight to paint and I did not have to fiddle about with detachable arms. Only the back sacs had to glued on. Two of the figures had raised muskets so I ditched those and gave this regiment a mounted officer instead. The standing poses and variation are excellent.