Courtesy of Hagen, the Russian artillery riders are now finished. Ahead of schedule for the Leipzig game in June which is great news. Three different poses. The limbers, and horses are all Art Miniaturen. 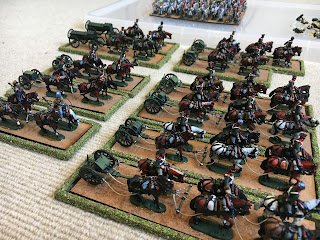 Four foot batteries, one Guard foot battery as well as two line horse artillery batteries. (converted with helmets chopped from some Dragoons but these won't be stuck to their horses as I understand from Hagen that some "proper" HA riders are being sculpted at the moment) So these will be for Leipzig and I'll buy/paint four more riders when the better version arrives. One HA Guard limber and one Cossack limber. The Cossack figures are those supplied by Art M, but I have inserted whips for each figure. Both the Guard limbers have a caisson each. Again, the traces took a while to do. 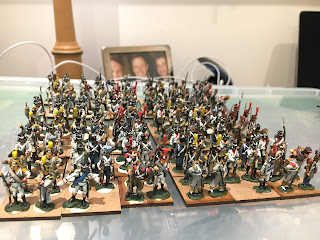 The Italian brigade is nearly finished. These are a mixture of Art Miniaturen and Hagen. They mix in pretty well and have been painted as the 1st and 7th regiments.(3 battalions each) One regiment has more figures in greatcoats while the other less. These two regiments will be split between Bertrand and MacDonald. (rightly or wrongly....it doesn't really matter too much.) I'll do two standard bearers, one for each regiment. Some skirmishers will also feature....3 stands of 3 figures each of the 1st Regiment light infantry. (yellow facings)
Posted by Napoleonics 20/20 at 08:17 No comments: