Both sides, French plus Poles and Westphalians vs Prussians were fairly evenly matched with 3 Infantry divisions per side (2 brigades per division) and the terrain made up two nights before the battle commenced.

The positions were fixed and there were 3 objectives: the farm (3 buildings) , the village (seven buildings) and the bridge. 2 points for each objective. In the case of the buildings, the side that held the majority would get the points. Each hill (8 in total) was also worth 1 point and for every brigade destroyed, 1 point deducted. This latter inclusion was felt necessary as a draw seemed a distinct possibility before the game started. How wrong we were. The only variation in the scenario was that each side would have a flank attack coming on move 3 and with the 1D8 this would designate the point of entry. (8 being a deep flank attack)

OOB. 3 Inf Divs per side plus 7 cavalry brigades (independent) Each brigade of infantry and cavalry would have a brigade commander (BC), so a total of 13 each. Each BC would be given a rating ranging from +2 to -1. 2 BC's would be +2, 2 BC's would be +1, 2 BC's would be -1 and the remainder would be 0. Each brigade had a predetermined rating. (also from +2 to -1) Since the French had no Guard infantry or cavalry their solitary brigade with a +2 rating were the 2 regiments of Cuirassiers. The Prussians, however, had both their Guard infantry and Guard du Corps cavalry. The French would be relying on their Poles (+1) and had marginally better cavalry. The Prussians meanwhile had landwehr battalions (-1) scattered amongst each infantry brigade while the French had a Westphalian brigade, also at -1.

The French had stolen a march on the Prussians by taking the village (majority of) before the game had even begun. The Prussians were not aware of what faced them in the village though the blue and white flags might have given them a clue. Facing the Westphalians were the Prussian Guard's brigade and some heavy 12lb batteries. The French did not have any 12lbs as I still have not finished the caissons!!

Please refer to the map for the starting points:

PRUSSIANS: (line infantry were either Silesian, east or west Prussian or Pomerarnian)

The Prussians won the initiative and elected to go first. The big advantage in this instance was that units beyond 80cm of the enemy could move twice. This allowed the Prussians to get close to the barn in the farm complex and for their Guard to close in on the village and deploy their artillery. 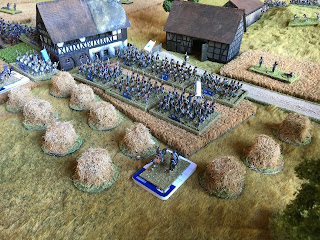 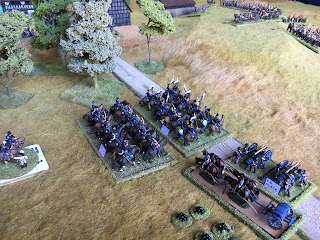 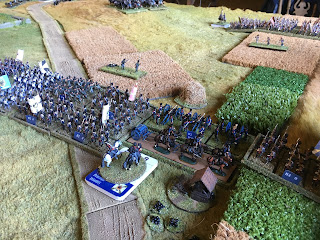 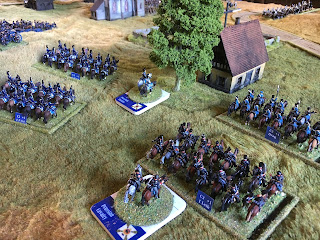 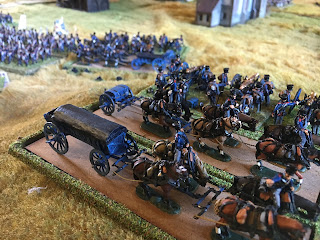 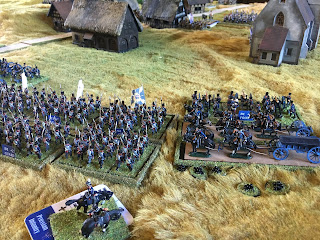 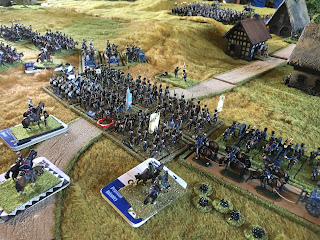 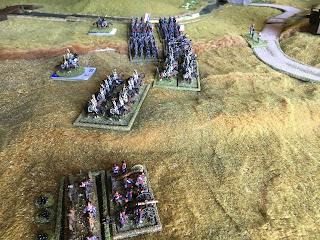 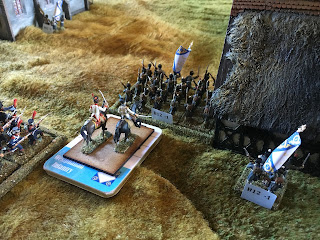 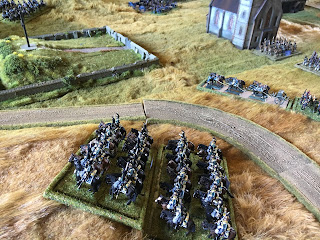 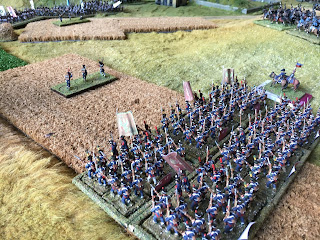 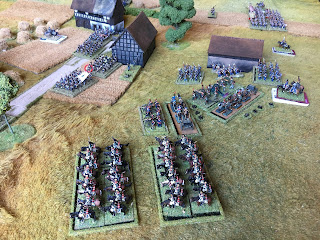 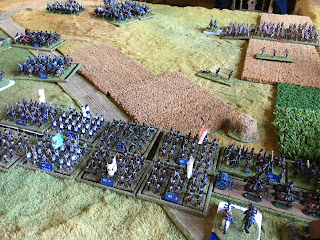 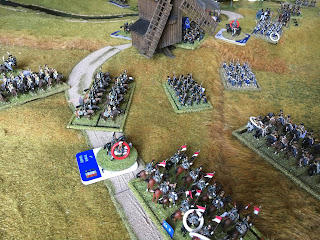 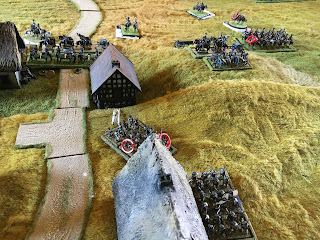 We did in fact tot up the points in the end. Prussians ended on +9 and the French -5. But at lunchtime the battle was in the balance. All the more remarkable as to how it finished up.

Excellent fun and the rules stood up well. The brigade test, taken before each move, for every brigade, does take time, but is crucial to the command and control mechanics of the game.

The French right hand brigades eventually ran out of steam, despite having a superior cavalry presence by the end. This was not enough to secure the ridge or the bridge, which ultimately became untenable when Prussian cavalry arrived late in the day.  So the Airfix Swiss, who marched joyfully across the bridge earlier, found themselves leaving the field in a hurry shortly afterwards.

The Westphalians in the centre did as well as could be expected, but successive  throws of 1 or 2 in this game will always make life difficult. The Poles tried but ultimately failed to take the barn in the middle of the farm complex. So each of their +1 battalions never saw their potential fully realised.

Credit should be given to the Prussian commanders. The Prussian right used their cavalry to put pressure on the Poles without committing their inferior infantry. The Prussian Guard made their +2 rating count in the village, but even they were badly mauled by the end. The Prussian left took the decision to cross the stream and reconsolidate their divided B6 and B5 brigades. This action saved that flank.

All over in 5 hours of playing time. Thanks to all those that attended.

PS I will eventually get time to paint the newly arrived Art Miniaturen French cavalry line chasseurs as the 3rd, 5th, 16th and 22nd regiments, and have them ready for 2018.