Some do and some don't. The intrinsic problem with representing skirmishers on the table top is threefold: it clutters the table and can slow the game down to such an extent that turns begin to take too long, and can simply over complicate the game. A recent Peninsula game, re-fighting Vitoria 1813, saw Allied skirmishers sweeping all before them so a happy medium has to be made. Worth having them on the table? I think yes, but let's not get too pre-occupied with their role that we end up with a messy table and a slow and complicated game. My collection focuses on central Europe in 1812-15 so avoiding the complication of how to use skirmishers properly in the Peninsula campaign. In Spain it is more difficult and greater thought may be needed as to how to represent them effectively.

Back to central Europe….
For infantry I have adopted the 3 man independent skirmish base for each formed light infantry battalion, which must remain a certain distance from their parent unit. Using a D8, this stand will score a disorder on a throw of 7 or 8 against most targets within range and if the target is already disordered, a hit. They are removed on contact with cavalry and retire on contact with formed infantry. They do not melee with anyone. If the parent unit they belong to is removed, the skirmish stand is removed also. I fully appreciate that whole battalions and whole brigades might deploy into skirmish order but that would be missing the point. If we try to cater for every eventuality in creating a rule set, we end up with an unworkable collection of rules.(or a very messy table!)

But what about cavalry skirmishers? Not sure if I have ever seen this represented on any table but if the campaign stage of a game is missing, it would be fun to have this element introduced. Again in a limited way. The role of the umpire might become necessary to make this work. For example, if there are hidden forces in a wood or behind a hill, you would not send a whole regiment of cavalry to recce the area, but perhaps just a token force. This could be represented by 2 figures on a base, who can move further than other cavalry units, but have no offensive role. Would retire on contact with any formed unit and would stand off against any enemy cavalry skirmish stand, so would be almost impossible to wipe out. I appreciate they had their carbine, but enabling this token force to score disorders or hits, would make them too important. Their role would be to scout areas of the battlefield for hidden enemy units only. Perhaps just 2 bases per side. 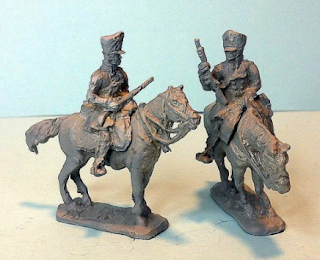 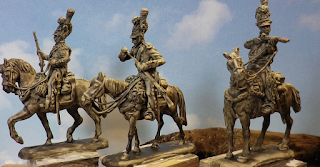 I think this could work so I will think about introducing this element to the game over the coming months. After all, no general knew what he was up against so having some "unknown" element to any game should always be included if at all possible. This addition will enable a general to sniff out those unknowns.
Posted by Unknown at 03:31 No comments: