Austrians and Russians vs French and Poles. 1813

The great thing about a large table (in this instance 17 x 6) with not too many troops, is that it allows for manoeuvre. Too many games tend to pack as many men onto a board and the whole affair ends up being a bloodbath. Not all battles were like Borodino but even that battle had some degree of manoeuvre (illustrated with either Davout's suggestion of a right flanking or Platov's jolly into the French rear as it were)

This time the French were outnumbered and defending two key areas, the farm and the village. The Allies had to either defeat the French (majority of units either routed or in retreat) or take both objectives. The French deployment was pre-set and could not be altered while the Allies could swop 2 brigades and move one. This they did. All cavalry was moved to the flanks (with none in the centre) so leaving the task of taking the farm to the Hungarian line brigade and a Hungarian grenadier brigade while the Russians had to take the village. The Russian left flank had an impressive mixture of cavalry and horse artillery. One Russian Guard regt (red), the Soum Hussars (grey), 2 regts of Dragoons (Pink and orange….can't remember which regts these were supposed to be), three regts of Cossacks (Don plus 2 irregular), the Pavlograd Hussars (turquoise/green) and the Grodno Hussars (dark blue) and 2 regts of Loubny Hussars.(blue)

The French left the task of defending the farm to two Polish brigades supported by a brigade of Hussars/Chasseurs. Two heavy cavalry brigades sat in the centre with two batteries of HA. The village was defended by the Middle Guard brigade, and the right flank ridge line was defended by the Young Guard brigade with a brigade of dragoons in support on the extreme flank. An Old Guard brigade was in reserve. The French had one fewer brigade, 5 regts of cavalry less and three batteries less that the Allies but had better quality troops. 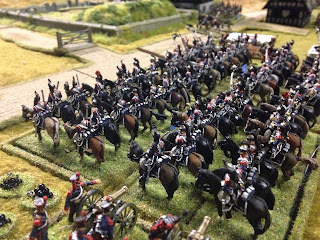 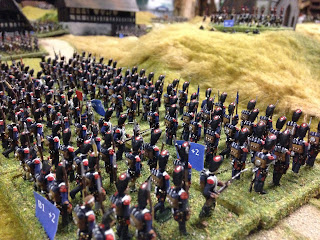 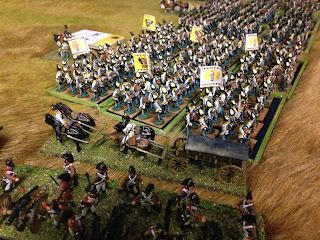 Austro-Hungarian grenadiers ready to assault the farm. (Art Miniaturen) the ammo wagon is plastic but riders are metal from Art M 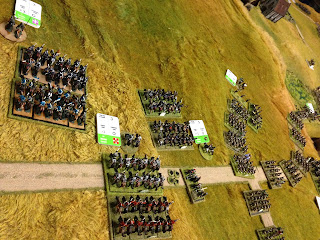 Russian cavalry on the Russian left flank begin their encirclement. (cavalry are Art M but Russian infantry are Newline designs) 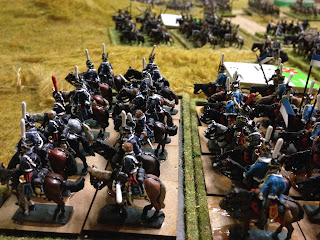 Grodno (front) and Pavolgrad Hussars. (Art M) go the long way round, trying to evade skirmishers hidden in the wood. 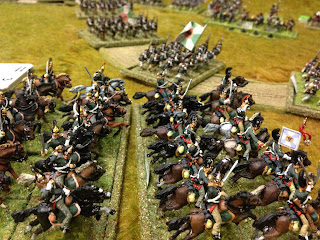 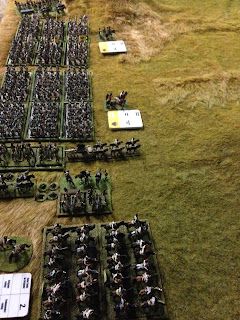 Austrian heavy cavalry in the foreground with supporting HA. Note the horse artillery ammo adjacent to the cavalry is courtesy of Franznap figures. Hungarian infantry beyond (Art M) 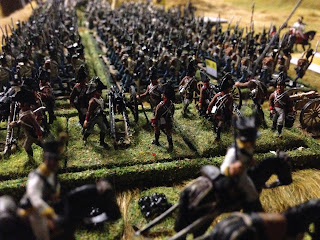 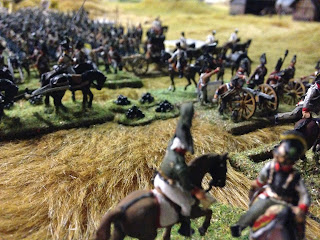 An ADC moves up to inform the Austrian cavalry commander to commence his right flanking manoeuvre. Note the four artillery piles of roundshot. Each HA and FT battery of the Allies had four rounds of effective fire (while the French foot batteries had five, illustrating the extra time the French had in preparing their defensive position.) 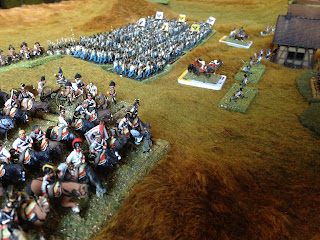 Austro-Hungarian skirmishers approach the outskirts of the farm, while the cavalry go round the largely undefended flank. Polish skirmishers in the wood did cause two disorder casualties on both the lead regts but a score of 7 on the 1D8 for the brigade test ensured that the Austrian cavalry successfully squeezed through this awkward bottle neck. 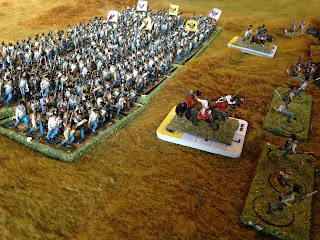 While the main body assaults the farm… 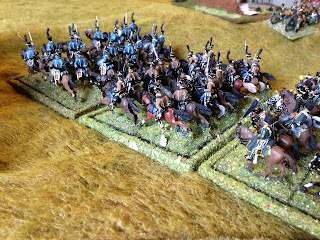 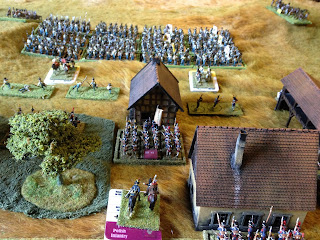 The Poles (Newline) sit and wait and deploy their own skirmishers. A French light battalion occupies the wood (barely visible)


The French had an option. Either defend and take the punishment once the Allied artillery had mounted the central hill and commenced bombarding the village or go on the attack and seize this key ground before the Russians could deploy. Now that the Russians had no cavalry cover in the centre this  latter option became a reality. 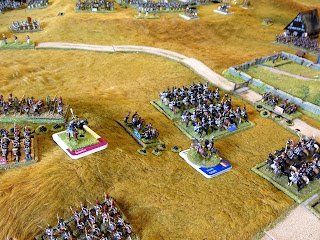 The two French heavy cavalry brigades move towards the central hill to stop the Russian advance. 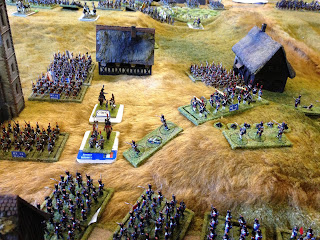 The French Middle Guard up sticks and move forward, abandoning the village to the locals. The Old Guard move to support. 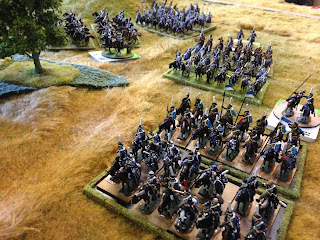 The Russian left flanking cavalry attack in full swing. But some move across into the centre... 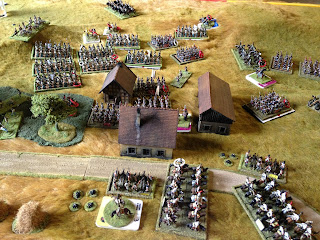 Roll on a few hours….fast forward….the Poles still hold the farm but Austrian heavy cavalry have completed their encirclement and lie to their rear. This made the ability of the Poles to pass their "brigade test" all the more difficult. (with enemy lying to the rear.) But some French light cavalry (just visible at the top of the picture) also posed a threat to the rear of the Hungarians. 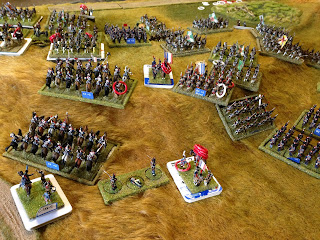 The French assault of the central hill was messy. Some units moving forwards, others backwards. Cuirassiers have pinned down several Russian battalions while the Middle Guard start to take the hill but suffer severe casualties in the process. Russian Guard battalions seen on the right (yellow flag) begin a counter attack and start to hit the Old Guard hard. Indeed one Russian line battalion (with both rear and flank support) managed to rout a Middle Guard battalion which was relying on its superior quality. 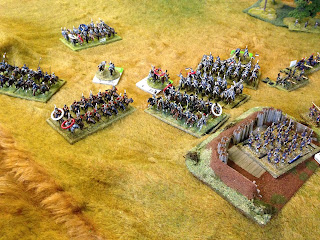 While some Russian cavalry went the long way round, others (Loubny, Soum and Guard Hussars with Cossacks swing in and pose a threat to the success of the Old Guard assault on the central hill. The French dragoons counter this threat but are destroyed in the process. (hence no picture….but they were there….all three regiments!) Elements of the Young Guard in the redoubt. Perhaps the foot battery should have stayed put and covered that approach instead of limbering up and moving to the right. 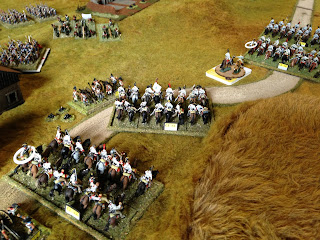 Austrian cavalry threat to the rear.(4 regts and 2 HA batteries) Post match it was agreed that one brigade of cavalry could have performed this role instead of the two that undertook it. The overall effect would have been the same. Had one of these heavy Austrian cavalry brigades been in the centre the French assault on the central hill might never have happened. 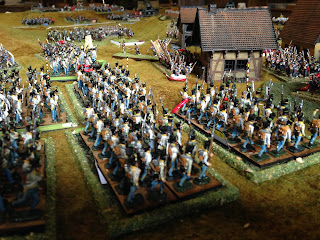 The Austro-Hungarian infantry made two unsuccessful attempts to take one of the farm buildings and were thrown back with heavy losses, despite these larger battalions having a slight advantage in the melee.

Overall it was agreed that the Allies had won a marginal victory. Denuding the Allied centre of any cavalry cover allowed the French to take the initiative with their own unexpected attack. Neither objective was taken though Russian Guard units had begun to enter the deserted village (too many gaps to plug) by the end. The French, however, were encircled and the Young Guard brigade on the ridge line, with no cavalry support, would have surrendered. The Poles ditto. In hindsight the French plan was bold and might have had a better chance of success if the supporting dragoons were already in place to support the Old Guard's attack o the hill, rather than starting on the extreme flank and having to fend off the Russian cavalry. Russian Guard infantry pinned down in squares would have been mincemeat for the advancing Old Guard infantry and supporting guns. But the Russian Guard were free to attack in numbers and the Old Guard were too thinly spread to fend them off.

Russian infantry casualties were double that of the French though the French cavalry were either all committed or destroyed. Russian cavalry losses were light.

Art Miniaturen are arguably the best manufacturer of 20mm Napoleonics. A decision to buy up large quantities of infantry was not taken lightly bearing in mind the cost but the variation of poses and quality of the sculpts make Art M head and shoulders above the rest and make such a purchase a sound investment.

The latest figures to be painted are a brigade of Hungarian line infantry and another of grenadiers (the blue breeches contrast well with the yellow facings). 400 figures in total,  and some Pavlograd Russian Hussars. The turquoise makes these chaps stand out. A Cossack aide to the command stand. Plus of course those essential movement trays!

Some Grodno Russian Hussars (dark blue/light blue facings) have also been finished. Photo to come. Austrian infantry and French infantry yet to come. Introducing limbers will also be a heavy investment but important for the look of the table top. Franznap will be providing the French limbers and Art M the Prussian/Austrian ones. 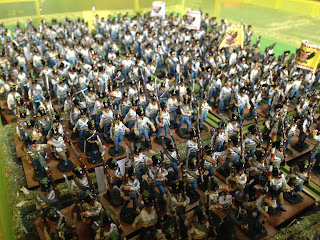 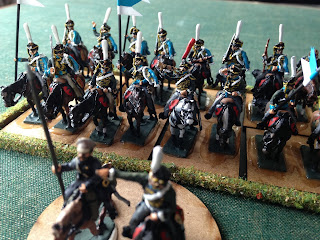