Played out on a table measuring 24' x 6.5' we saw the French up against a combined force of Prussians and Russians. Well...I say French. In fact the majority (2/3rds)  of infantry were Bavarian and Polish. About 2,500 figures approx....

The French had to defend 3 villages. 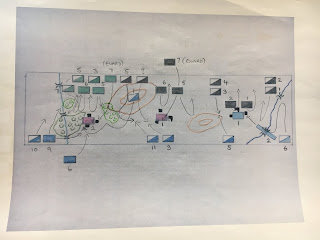 The omens looked bleak for the French from the start. Their 1st Cavalry brigade made up of line lancers and attached HA decided that their exposed position on top of the large hill was not worth retaining and turned about and headed for safety. Unfortunately the Allied artillery still had time to unlimber and get off a few shots which resulted in 3 hits and nothing to show for it.

Equally frustrating was a bounce through shot through the central village and into the French heavy cavalry Division sitting quietly to the rear. One hit on the Cuirassiers.

The Prussian 5th and 6th brigades, their lead battalions in line, moved towards the central village held by the Polish 1st Brigade.

On the left, the Russian 5th and 6th brigade moved towards the village held by the Polish 2nd brigade. Luckily for the French, the off table 6th brigade rolled a 7 and was allowed entry on the "right" side of the stream allowing them to re-enforce the village. Half of the French 9th Brigade moved across the stream to help also....while the remainder (and notably the artillery) moved towards the bridge between the woods.

The Bavarians succeeded in getting their 2nd Infantry brigade across the river (protected by two battalions in square) and were able to re-enforce their colleagues in the village. The French 6th cavalry brigade moved down towards the bridge where they faced off across the river to the Prussian cavalry staring at them beyond. The Bavarian foot artillery in the redoubt on the hill and more importantly the 6lb battery belonging to the Bavarian 2nd brigade (which unlimbered along the river line) started to cause significant Prussian casualties.


Just when the French centre was looking at its most perilous the Prussian commander threw a series of poor brigade test dice and both the 5th and 6th infantry brigades were halted. Taking more punishment from the guns, they were soon falling back.

A large cavalry action ensued around the large hill, but Allied strength in numbers was always going to make this an uneven contest.

On the other flank, The Russian infantry were also halted just outside the village, largely from enfilade fire from the French battery the other side of the stream. This made the approach to the village a killing ground. The 5th Russian brigade suffering 50% casualties but not before they succeeded in knocking out the defending Polish battery.

Thrown back in all sectors, the Allies re-grouped. The French would have tried to take advantage by pursuing but lack of cavalry made this impossible. So the Allies were permitted to withdraw unmolested and then two things happened. First the Prussian and Russian 7th brigades (Guard) advanced at an oblique angle on the central and left villages. Also, their artillery now had a clearer field of view and time to unlimber and pour devastating fire into all three villages. So while the French had re-buffed the first assault the defending French brigades were now looking very weary. The 1st Polish brigade was on its last legs in the central village and by the end the last battalion surrender, having been surrounded by Prussian Guard units. The Bavarians held on well, but faced with a line of Prussian batteries, the writing was on the wall for them too.

The Russian Guard's approach was checked for a while by the re-positioned French 1st Cavalry brigade but once Russian jaegers infiltrated the wood the French had to move on. The Russian Guard broke square and moved towards the village.

So a points victory for the Allies. Whilst they had not taken all 3 villages they would have done so eventually. The Allies only had one brigade totally destroyed and that was the 4th Prussian cavalry brigade made up of two Prussian Cuirassier regiments. The French meanwhile lost both hills and had the 1st Polish infantry brigade wiped out as well as the 3rd, 5th and 11th cavalry brigades. All their centrally placed cavalry in fact.

Great game. Excellent play by the French commanders on the flanks in preserving their forces as best they could. The hardest task was for the commander of the Polish 1st Brigade and they held on till virtually the end. Just when the game looking to be in the grasp of the French early on, the Allies were able to re-organise, bring up both their superior artillery and Guard infantry, and turn the tide.