French infantry for Leipzig in June

The French line are all 20mm Art Miniaturen and have static poses.

The light infantry are in marching poses. Inserted are a few marching Hagen French figures in greatcoats to break up the dark blue mass. Seem to mould in quite well. 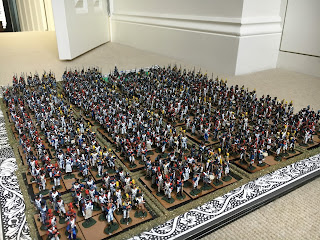 Soon to come will be another 4 French line infantry brigades (570+ figs) all in marching poses. I reckon another month or two.

Progress on Leipzig is going well. Due to be played out on the 9th and 10th June 2018 there are likely to be 20 commanders in action over the course of the two days . Formulating a simplified OOB is the challenge while trying to avoid getting too bogged down in unnecessary detail. The crucial thing will be to reflect the balance of troops on both sides. So there will be just under 30 French cavalry regiments up against approx 40-45 Allied cavalry rests. (16 figures per regt) so 1,120 cavalry figures alone if my maths is correct (never a strong point). The balance of both sides will be much more even in the southern sector.

More to come on Leipzig shortly. Two attendees have already made their claim to certain appointments eg The Russians in the north and Poniatowski's Poles in the south. (though there were a few Poles detached in the north to help Marmont)