With just over 7,000 20mm figures on tables spanning 24 feet by 21 feet in a horseshoe, this was going to require significant planning, which commenced in September last year.

By the third attempt and having read Digby Smith's account twice I had a better idea than before. But how to produce a game that might both work and be enjoyable was always going to be a challenge.

In the north Prussian tactics focused on bringing up their 12lbs guns and hammering Mockern into submission before attempting any assault. Prussian and Russian cavalry attacks proved disastrous against the power of the French artillery. Russian infantry found it difficult to deploy given the congestion. So Allied superiority in numbers never really manifested itself given the log jam of limbers and caissons. Marmont succeeded in holding his position but each of his three divisions (we scaled everything down so these became referred to as brigades) were badly mauled by the end of day one. Dombrowski also held but neither would hold on for long without support and this was initially provided by Bertrand.
The Allies did spot the crossing point, but Gyulai's forces were never in a position to exploit it.

Arrighi's cavalry and the whole of Souham's Corps was sent to Lindenhau. I think safeguarding Lindenhau from the Austrians could have been achieved without the cavalry so Arrighi could have been used elsewhere. Gyulai attempted to go round Lindenhau and try to attack from more than one rather predictable direction. A jaeger battalion took one of the 5 buildings but were soon thrown out.

In the south-west Merveldt and Leichtenstein had a dual problem. The swamps and woods up towards Connewitz would make any approach difficult but where else to attack? The only other option was to transfer troops across the river via Crobern and help Kleist the other side of the river. This was done immediately but the commander conceded that by sending no threat to Dolitz and Connewitz it allowed the French to focus on rebuffing Kleist. So the three battalions of jaegers and skirmishers were all sent east which left significant cavalry reserves stranded. One can see how frustrating this must have been for the Austrians in 1813 but to attempt to break through in the Connewitz/Dolitz sector, which was Schwarzenberg's plan, was never going to work and the commander on the day recognised this and drew up an alternative plan.

Kleist, Eugen Württemberg, Gortchakov and Klenau all launched their respective attacks against Markkleberg, Wachau, Lieberwolkwitz, and the Kolmberg hill respectively. Kleist made steady progress freeing up space to the rear in Crobern and succeeded in taking Markkleberg. Eugen Wurtemberg managed to get into the wood to the southern edge of Wachau by ejecting the French light infantry battalion holding it and put significant pressure on Victor. Victor's Corps (brigade) was large with 9 battalions and a foot battery taking both days to whittle down and by the very end it still existed....but only just. Gortchakov started banging on the door of Lieberwolkwitz and took one of the buildings at bayonet point but was soon thrown out by Lauriston's troops. However, a combination of French cavalry attacks (Bordesouelle's heavy cavalry) and Gortchakov throwing a 2 on 10 out 12 combats largely decided his fate. The Allied thrust, just as it did in 1813, was beginning to run out of steam. Klenau strolled across the open country towards the Kolmberg and managed to get artillery on top. What the Allies did not know was that French reluctance to put up a fight in this sector was not down to incompetence, but simply that MacDonald's Corps was not due to arrive until moves 4 and 5. Klenau's advance came to an abrupt halt and began to falter. The distances between the respective Allied columns meant they could not support each other and the Allied line from Wachau to the Kolmberg began to fall apart. The Allied reserves (Prussiand and Russian Guard units were mobilised immediately but took too long to reach the front line to help the initial assault and would have to wait to Day 2 and moves 11-18 to make an impact.

By the end of Day 1, Marmont's Corps was in poor shape but there were still no Prussians in Mockern. Delmas had not appeared but French discussion resulted in both Curial and Friant's divisions being assigned to the north. Marmot was relieved. Without their help he would surely fail. Gyulai found himself outnumbered but one could argue he had done his job by diverting significant French units away from other sectors.

In the South-west Austrian cavalry units were probing the river crossing points but it was not until the artillery arrived that the pendulum began to change. Kleist held Markkleberg but Eugen Wurtemberg and Gortchakov ceased to exist. Klenau was also a spent force but losses by the commander there had been placed on the wrong commander which didn't help his cause. Austrian grenadiers were mobilised overnight to support a counter attack by Klenau and Platov's Cossacks joined in the fun.

Behind Wachau and Leiberwolkwitz both Mortier and Oudinot respectively moved up to support Victor and Lauriston. With no Old Guard in this sector that was it for the French. They did have help from 2 out of the 3 Guard cavalry brigades made available overnight.

Poniatowski and Augereau's position had a charmed life for Day 1 but life would be very different on Day 2. If only MacDonald could take advantage of the faltering Klenau but without cavalry reserves this would prove impossible.

Having deployed the remaining reserves it looked positive for both Marmont and the French holding Lindenhau but the southern sector could still go the Allied way. But would it?

Old Guard units steamed through Gohlis to the front line and replaced mauled units in Mockern. The Prussians  were by now a spent force and the Russians did not have the width of space to get around Dombrowski. Delmas's arrival towards the end secured the survival of Dombrowski. Marmont's Corps virtually ceased to exist but it mattered little. Mockern had been held. Guylai's force was eventually routed and Hecht's cavalry fell back. The French held Lindenhau where significant victory points were placed.

But Augereau and Victor were on their last legs and Mortier was desperately trying to prevent Prussian Guard infantry from taking Wachau. If the game had continued it seems likely that the French might have crumbled in this theatre of the battle. Merveldt/Liechtenstein were on the verge of storming across both bridges at Connewitz and Dolitz as their superior artillery eventually found their range. Kleist's Corps was also in special measures but Austrian jaegers would secure the position just east of Markkleberg. Russian and Prussian Guard infantry made headway in Wachau but Lieberwolkwitz rarely looked threatened on Day 2. Gortchakov came closest but he and Pahlen's cavalry were no more.

Russian Guard cavalry made a valiant effort to strive forward towards Leiberwolkwitz but was attacked in the flank and destroyed by French heavy cavalry. Without cavalry support Raievski's Russian Guard which included the Pavlov Grenadiers were pinned in square and spent most of day 2 immobile. Most of the Allied cavalry was stuck in the Markkleberg/Wachau area and simply unable to re-deploy. By the end 6 whole Allied cavalry regiments (3 brigades effectively) were totally undamaged.

Greater freedom of movement could be found further east however. MacDonald could not build on his successes of day 1 and Klenau's revitalised Corps together with Platov's cossacks and Austrian grenadiers in rear support made life for MacDonald difficult but MacDonald succeeded in a fighting withdrawal with practically no cavalry to assist. By the end the Kolmberg was being contested yet again...

So strategically the French had failed to beat the Allies in the south and perhaps as umpire this was what should have been set as a task. However, it was the victory conditions that the French focused on, laid out at the beginning:

1 point for every building.
3 bonus points for holding all 5 buildings in Lindenhau.
1 point for each hill.
(-)1 point  for each brigade destroyed.

Losses in Mockern being particularly severe.

So a French victory but if we had continued the Allies would probably have prevailed in the south. Excellent fun and funnily enough large parts of the game mirrored what happened on the 16th October 1813.

The figures used were predominantly Art Miniaturen,  Newline, some Hagen, some Franznap and a few plastic Zvedza (Saxon heavy cavalry), Revell and even Airfix (Russian jaeger battalion) Maverick Models supplied many of the newer French line and light infantry and Italian flags. 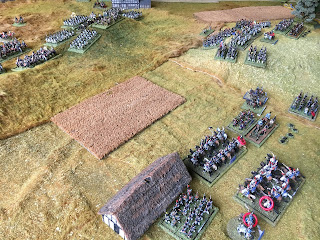 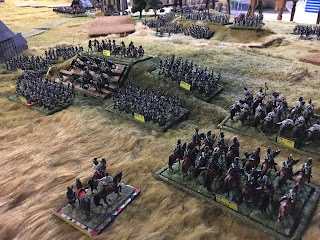 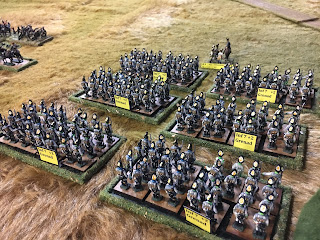 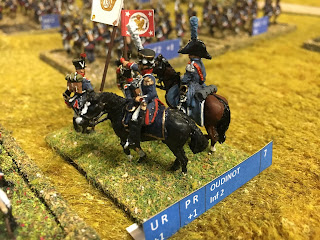 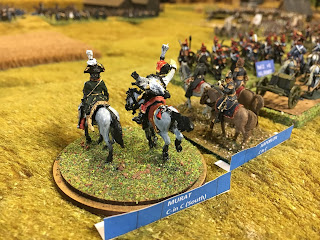 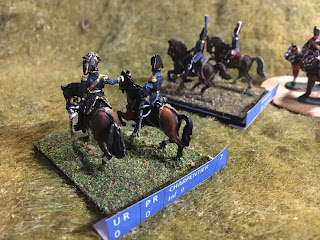 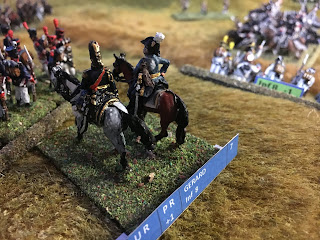 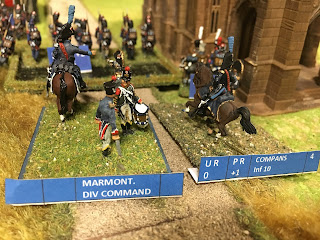 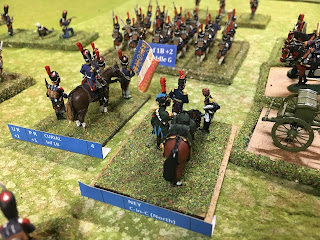 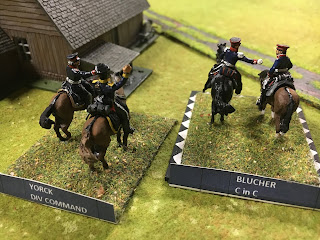 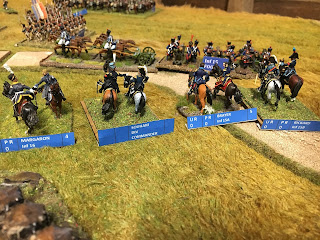 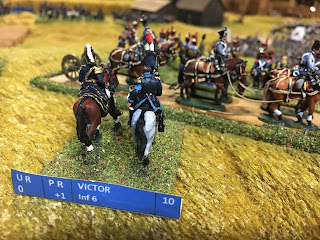 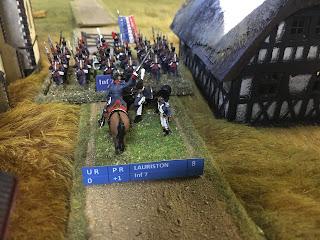 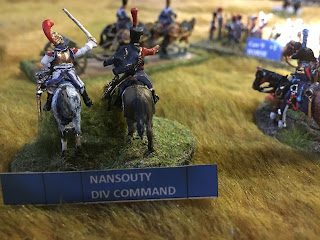 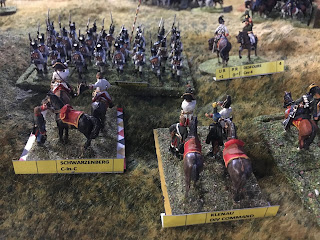 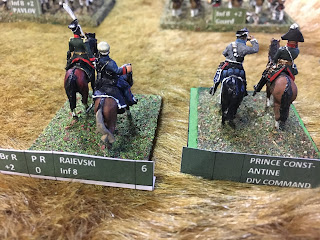 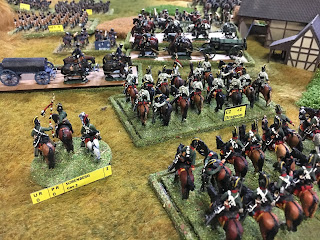