Franznap has spotted a niche. By producing artillery riders with greatcoats/overcoats they have given war gamers the flexibility to produce some interesting conversions, even if the covered up uniform might be a bit dull. It also helps to alleviate the problem of getting these uniforms right…quite a bit of conflicting information.

The heads were from Bavarian infantry (SHQ) and not from Newline Designs as they would have been too small.  I was keen not to cut off the collar of the Franznap French artillery rider bodies. Look ok to me. The horses are from Art Miniaturen (static Prussian) and the French caisson from Franznap. Looks like I will need to order the Art Miniaturen Prussian caisson to accompany this Bavarian set. I may also have to trim down the boots as they probably ought to be wearing campaign trousers. (the boots are barely noticeable under the coat) I also had to trim off the bum roll from the horse or else the rider would not fit properly onto the horse.

I have no idea at this stage which limber to choose but reading various forums it would probably be either the Austrian or Prussian limber (probably the latter) Bearing in mind so much equipment was captured I think the colour of the limber and caisson is perhaps more important than the actual type.

The Prussian caissons are also nearly finished. Just need to do the traces and base them properly. One row of these horses have not yet been stuck down….or else I would have problems doing the inside track of the traces. Tedious job but needs must. I will add some hay to the rear of some of the caissons. 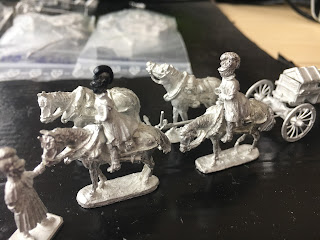 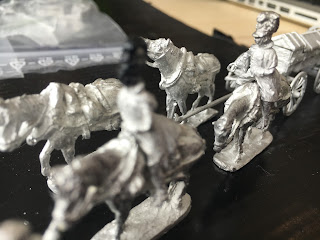 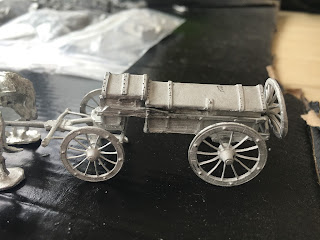 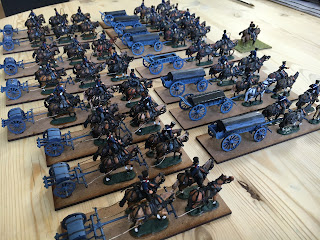