These chaps were a delight to do. The white piping and decoration being the most testing part.
There will be a 2nd or 3rd regiment to add to these, though rarely brigaded together I understand.
Posted by Napoleonics 20/20 at 07:44 No comments:

Two battalions of Italian Guard to add to the mix. Circa 1813.  Blue greatcoat (rolled up) was one of their distinguishing features. 3cm x 3cm MDF bases for the Grenadiers.
Velite chasseurs as skirmishers. 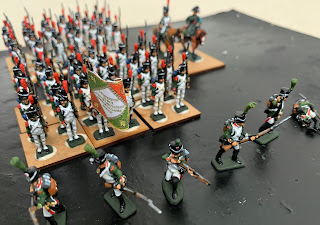 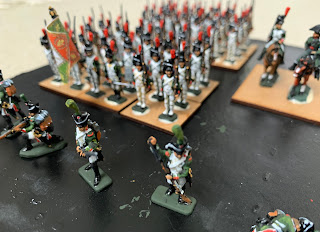 Art Miniaturen have produced some excellent poses with "chapeau rouleau". So appropriate for the later stages (1812-1815). It would appear that the 6th and 8th hussars were some of the early units to wear this new head gear so these chaps are painted as the 8th. No pompoms yet.....any ideas on what a 16 man regiment should depict? (4 in red, 4 in light blue, 4 in yellow/orange and 4 in violet?) Or according to another source is it red, green, blue and orange?)
All my other light cavalry units should be the same....work to do.
This regiment will accompany the 1st, 2nd and 10th Hussars already painted. 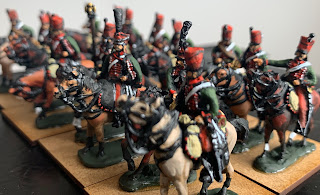 Next up will be two battalions of Italian Guard in green with two skirmish bases in green also but with the shako and am pondering whether to do some Neopolitan line infantry as well. Though doubtful how involved they were in Germany in 1813.
Posted by Napoleonics 20/20 at 04:31 No comments:

Tony at Debris of War produced these fields and once surrounded by the hedges produced by Keith Warren before he retired, look very effective IMO. Some are standard shapes while others are more irregular. Once placed on top of the teddy bear fur they help to break up the uniformity of the background tone.
All in all they enhance the battlefield and war-game experience. 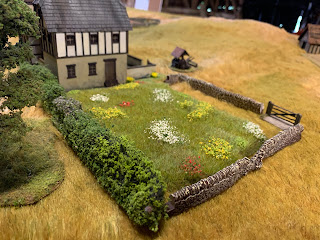 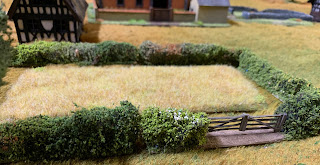 Single day game held at the weekend with a much reduced number of people attending as Dennewitz has had to be postponed till lockdown eases.
4 Divisions of infantry on both sides. French (2), Italians (1) and Saxons (1) vs 4 Prussian Divisions.
One reserve brigade of infantry on both sides could be deployed anywhere along the back line from move 2 onwards. The French had 4 battalions of YG and 2 battalions of Middle Guard plus 2 regiments of Guard light cavalry, which they deployed on move 2 in the centre to plug a serious gap in the line. The Prussians decided to deploy their reserve (6 battalions of Guard) plus two regiments of cavalry also in the centre but it would take time for Prussian units in more forward positions to clear the way. As it was the Prussian Guard made an impact but very late in the day.
The Prussians on the left flank and centre left, without these vital reserves, were always going to find it hard going and so it proved. Their attempt to take the objectives held by the Saxons failed and once the cream of the cavalry they did have, were wiped out, the French effectively rolled up the Prussian left flank and centre left.
The Prussian right flank held on well against the Italian Division and with some carefully sited horse artillery made the Italians fall back. However, the Italian brigades remained in tact and had the Italians had some better cavalry (the ones they had had a -1 general and consistently failed the brigade test) their attack may have been more successful.
So by lunchtime, the Prussians had incurred considerably more casualties and it looked a done deal. However, after lunch the Prussians in the centre and centre right finally began to make headway with superior numbers.
By the end it was only a marginal French victory by only 2 points. Largely because the Prussians lost 4 whole brigades while the French only lost 1. Objectives on the ground were fairly evenly spread.
Thank you to those who came along.
Photos show the starting positions. (no photos for the end....) 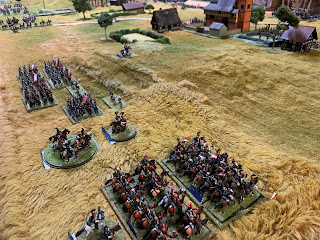 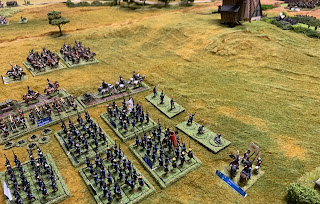 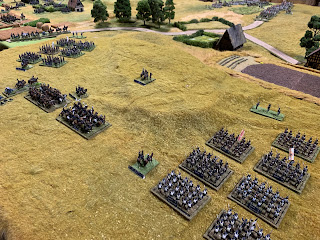 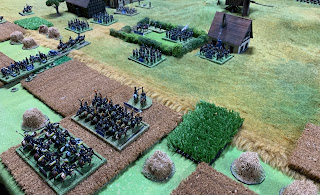 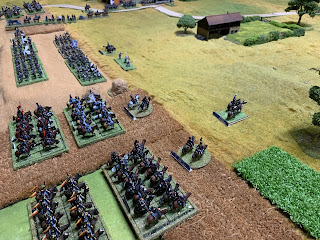 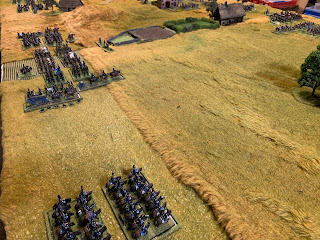 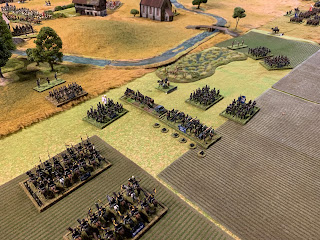 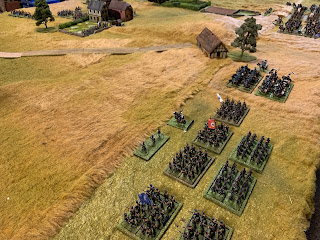 Most of the figures are Art Miniaturen, with Newline infantry and a few HaT jagers, being the only plastic representatives. The Prussian reserve infantry in their grey were interestingly the most enjoyable to paint and that includes the 2nd Pomeranian Landwehr cavalry. Total 2,300 figures. 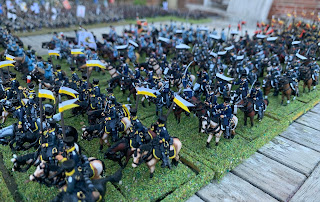 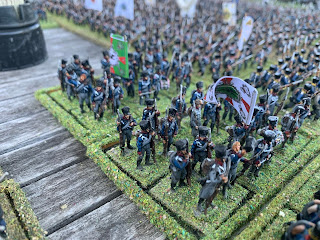 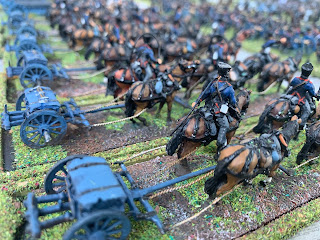 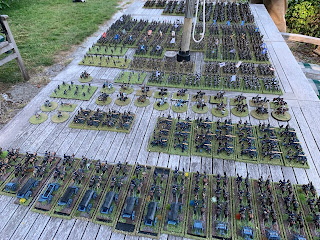 Courtesy of Jim Sharpe, I have now completed another 1/72 scale building to add to the mix for Dennewitz. (Decision of whether the game goes ahead will be made in a couple of weeks time.) 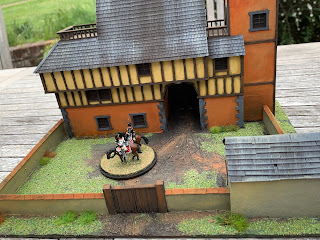 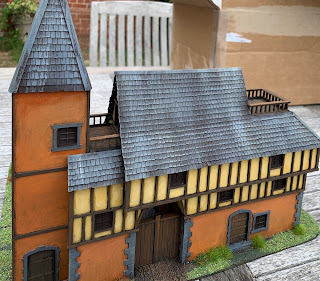 I ended up painting the building in quite bright tones/colours but I guess it needs to stand out. I still need to finish off the window furniture. This strong point will probably be in Gohlsdorf.

Some new fields, courtesy of Tony at Debris of War will also be on display. His first batch was impressive, so I have ordered some larger fields with more random shapes. These should sit nicely, perhaps with a bit of added weight underneath, on top of the teddy bear fur.